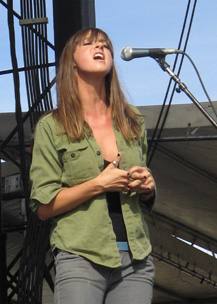 We've all heard the stories and read the reviews concerning the live performances from Cat Power, aka the elusive Chan Marshall. Mumbling lyrics, stopping mid-song, showing up late – if and when she even bothers to turn up on stage at all. Coming into the second decade of her tremendous career, Marshall is silencing the rumor mill and putting all of those tales behind her.

After admittedly seeking substance abuse and psychiatric treatment earlier this year, Marshall has emerged looking vibrant and healthy, emanating a warm glow that can only be described as happiness. All of this is not to say that her quirky mannerisms and self-depreciating comments have completely disappeared though.

While performing, Marshall is in a state of constant movement. Hand gestureing, wiggling, kicking her legs out, doing the chicken dance, pulling her green army shirt closed tightly around her body; her nervous energy can't help but be transferred to the audience at times.

Marshall not only brought her intense performance style to the Orpheum stage, but was also accompanied by the 11-member strong Memphis Rhythm Band. Guitar, bass, drums, brass and string sections were rounded out by two solid, female back-up vocalists.

The crew of musicians acted like a support group in every sense of the phrase. They elevated the show sonically with their stellar musicianship, while continually encouraging and coaxing Marshall. With the Memphis Rhythm Band at her side, the Georgia native blossomed and fully embraced her Southern soul roots.

The band kicked off the evening with two instrumental jams before Marshall appeared on stage to the boisterous notes of the title track of her latest offering, The Greatest . The night's set list really didn't delve too deep into Marshall's Matador catalog and was mainly comprised of songs from The Greatest , like “Lived in Bars” and one of the stand-out portions of the show, “Where Is my Love.”

During this number, the strings from the cellist melted into and over Marshall and the two back-up singers' harmonic banter, producing gooseflesh on numerous arms throughout the venue. Despite minor problems with the sound system, Marshall's vocals shined.

At times her raspy drawl was as welcome as a tall glass of lemonade on a hot summer's day, rising to great heights or dipping way down low when you least expected. The distinctive smoky quality of her voice is reminiscent of Blues legends like Etta James and Billie Holiday.

Long-time Cat Power fans were treated to a couple of songs from 2000's The Covers Record when Marshall took a seat at her piano. Some of the tunes were unrecognizable at first, such as the upbeat version of the Rolling Stones' “(I Can't Get No) Satisfaction,” due to Marshall almost entirely changing the melody of the songs.

She would sing most of the original lyrics, though, and her rendition of Nina Simone's “Wild Is the Wind” was nothing short of stunning. Marshall and the band also belted out covers of “Crazy,” the Gnarls Barkley hit, and an a capella version of Smokey Robinson's “Tracks of My Tears.”

The evening was rounded out by the stirring “I Don't Blame You” from You Are Free (2003). A song dedicated to stage performers, Marshall sang, “ You were swinging your guitar around ‘cause they wanted to hear that sound that you didn't want to play. … They never owned it and you never owed it to them anyway. I don't blame you.”

It was a perfect way to tie up the evening as well as a fitting welcome into the new era of Cat Power. Marshall has triumphantly shed some of the melancholy that infused most of her early work. Although it is missed a little, the powerful soul and infectious spirit are still there. Chan, we really don't blame you. —Yuri Shimoda