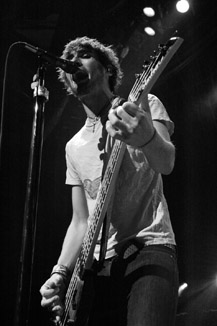 As popular as All-American Rejects have become, it is admittedly hard to not think of them as manufactured for the sole purpose of commercial success. Their music is infectiously catchy, they're all good looking guys, their fan base is mostly female … that means they're like, fake, right?

Just because they're such lovable douchebags, however, the Rejects defy all preconceived notions and popular opinions about them by showing the solid musicianship of seasoned professionals while making no excuses for the arena full of screaming adolescent girls they always draw.

Playing mostly songs off last year's Move Along , the band rocked through its set with an amphitheater full of screaming girls matching them word for word, intent on showing the band that every Rejects song is indeed a fan favorite. Taking pause to run out to the middle of the audience for an acoustic rendition of “Straightjacket Feeling,” frontman Tyson Ritter and guitarist Nick Wheeler made sure that even the nosebleed seats got their money's worth for the show.

Finally going high-production after years of stripped-down performances, the Rejects made sure that their stage setup was, like themselves, entirely cheesy and over the top. What's so great about when the four Oklahoma natives do it is that goofy, half-inebriated self-awareness that would otherwise come off as trying too hard when in the hands of any other band.

Ritter's blatantly over-indulgent, boozy mannerisms run a fine line between obnoxious and charmingly uninhibited, but when taking the Rejects for all they're worth, the latter tends to win out with the band members showing an undeniable commitment to their craft. You're not seeing Radiohead or anything, and you won't find the meaning of life somewhere in the lyrics, but of all the bands trying to make catchy and marketable rock songs right now, the Rejects definitely do it best.
Article posted on 12/11/2006
This article has been viewed 2430 times.