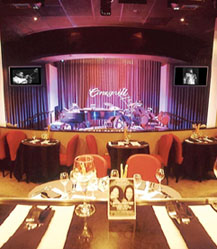 Originally opened in the early 1930s, Cinegrill is located inside the Roosevelt Hotel on Hollywood Boulevard. Unsurprisingly, it was the cool place to be way back when, where diners and drinkers may have seen the likes of Humphrey Bogart, Ernest Hemingway, F. Scott Fitzgerald and Marilyn Monroe.

Today, Cinegrill’s interior is a lush black all round, with only a splash of color – the red on the chair backs and the stage curtain, which provide a nice focal point for the room. Tiered up several levels so all patrons have a good view, the place reminds me of the sinful, olden days of Las Vegas. No doubt this is deliberate, because in its glory days the Cinegrill was like The Tropicana Lounge or the Copacabana Club where performers such as Frank Sinatra, Rudy Vallee, Mary Martin, Rosemary Clooney and Eartha Kitt crooned and strutted onstage.

Arrive early (between 6:30 p.m. and 7 p.m. is recommended) to allow for dinner which is served before the show begins. My guest and I started with a Newcastle Brown ($5) and a glass of Sterling Cabernet ($8) before having a look through the short but impressive menu.

I chose coconut crusted chicken brochette with Cantonese plum compote ($11.95) and my guest picked coconut crusted shrimp on crispy rice noodles with delicate micro greens and spiced Thai sweet chili sweet sauce ($13.95). Both entrees were delicious, though not as largely portioned as they sound.

For the main course, my guest picked the applewood filet mignon in port wine foie gras emulsion with lobster mashed potatoes and bay vegetables ($27). Initially attracted by the lobster mash, our very friendly server warned us that the steak tended to be overcooked – and it was. We also found the vegetables tepid to cold, although that could be forgiven as the influx of people necessitates the hurried serving of meals.

I chose the drunken king salmon with shrimp scampi fondue sauce, mascarpone-enriched risotto and baby bok choy – the latter of which was sadly cold, though the fish was excellent and the risotto was heavenly.

Just having time to order dessert before the show began, I chose a generous serving of berry sorbet ($7) and my guest had the cheesecake ($7), both of which were delicious and – as with all of the dishes – beautifully presented.

The evening’s show featured squeaky-voiced Ellen Greene, best known for her role in "Little Shop of Horrors," who certainly threw herself into the performance. Frequently close to tears, she sang songs from her show "Torch" which paid tribute to diverse artists such as Tom Waits, Queen, Kate Bush and Tori Amos. The audience loved it, and the backing band – especially the cellist and the pianist Christian Klovits – was also exceptional.

Cinegrill is definitely an experience. Good food, good wine (my guest especially recommends the red) and an overall good time that mixes cult, kitsch and the atmosphere of old-world Vegas. What more could you possibly want?

Shows run Mon.-Sat. at 8:30 p.m. with additional shows on Fri. and Sat. at 10:30 p.m. No reserved seats or tables in the nightclub; early arrival is recommended. There is a $10 per person food and beverage minimum. For tickets or more information, visit www.cinegrill.net.

Fine Dining
M Grill is a Meat Lover's Paradise: Bring in the Campus Circle Coupon to save 10% off your entire bill
4,682 views