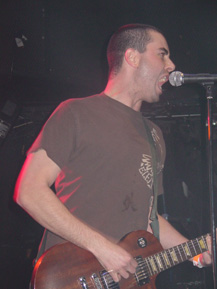 Along the curvy Sunset Strip lie a handful of venues enjoyed by locals and star-searching out-of-towners alike. The history of the KeyClub towers over the acts that are about to perform on its stage, and they can feel the pressure of the unsaid standard of greatness they are expected to bring to its stage.

Thirsty for drinks and music, punks of all ages slowly drizzle onto the dance floor as the opening acts Atomic Youth and Local Hate expose their stripped-down punk anthems. Their shaky timing and lack of control show the bands' ages more than their naked faces and pubescent figures.

Waiting for the next band to come on was tortuous. Inside was a sweatbox, and outside was a chilly puke-fest. You can't beat the sights and smells of Hollywood.

Since 1997, the members of False Alliance have stuck to their guns, playing formulated old school punk up and down the West Coast. They stand their own alongside acts like Avenged Sevenfold, Guttermouth, Mike Watt, the Distillers and D.I. This show was no different as they grouped with FEAR and the Dickies.

As False Alliance began “Repression of Thought” it was obvious they had it together, playing tightly and seamlessly. As shoulders began to touch against sweaty shoulders, it was clear that the maximum occupancy was neglected. No one seemed to care as they took quite well to the punk foursome who spat and screamed its way thought the set.

The pit grew stronger and angrier as the band started the life altering chants of “Fear Expiration.” Filled with topless sweating mohawked men, the pit crammed front row viewers against the stage.

Among the first punk bands to emerge from Los Angeles, the Dickies showed their campy humor has not died since the late '70s. Lead singer Leonard Graves Phillips encompasses the true meaning of entertainer.

His crazy antics have not faded in 20 years because he doesn't live in the past. He spouted out a current joke about Michael Richards' on stage boo-boo as he shook around impersonating the comedian in the usual quirky manner.

There is no doubt that the Dickies are still brilliant, but why must Phillips have a finger planted in his ear with every note he sings? Is he a diva? Probably not, but either way they sounded amazing.

FEAR has been another staple in the L.A. punk community since we were mere sperm in the sacks of our fathers. The thought of Lee Ving conjures up thoughts of pasting fliers to telephone polls and personal attacks on people's hairstyles and way of dress. He also reminds us of how great old school punk really was ... no ... is . —Crystal Lafata