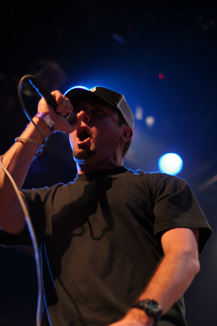 A mere glance at the line snaking around the corner at the Sunset House of Blues and one could easily ascertain one of two things: A) either the venue was hosting a MotoXXX party, or B) a band whose loyal following just so happened to be attired as if attending (A) were anxiously awaiting the opening of the venue doors.

On this particular evening, the occasion happened to be the latter of the two, although the plethora of flat-billers could just as easily have indicated the former.

The Los Angeles-based punk/metal band 2Cents kick started the festivities and successfully managed to rile up the near-capacity crowd with their raucous, gritty sound.

Next up was Ignite, who had recently returned from a South American tour only to hop back on the touring train for this 13-show stint with Pennywise. By the time they hit the stage around 8:30, the multitude had swollen to capacity, as both the upper and lower levels of the venue creaked and groaned with the palpable air of anticipation.

Powering through most of A Place Called Home, Ignite also peppered the set list with a few newer songs from Our Darkest Days , which fans seemed to wholeheartedly embrace. The band closed their set with “Run,” a lyrically poignant powerhouse off A Place Called Home .

The self-proclaimed geriatrics, AKA Circle Jerks, took to the stage around 9:30, and as a true testament to old school meets new, lead singer Keith Morris is still rocking the dreds despite a tinge of baldness on his crown. That , my friends, is punk rock. And really, who better to carry the torch than one of L.A.'s oldest and most influential punk bands?

In-between rants criticizing people, politics and the plastic, disposable nature of society, Morris not only managed to impart more than a few pearls of wisdom, but also flawlessly performed tracks such as “Anxious Boy” and “I Wanna Destroy You,” much to the delight of the shoe-throwin', shit-kickin' floor dwellers.

“We manage to pop boners every now and then,” Morris joked during a rather comical discourse about being an elderly band in an aging scene after which he seamlessly segued into an introduction of Mr. Dix Denney of the Weirdos. “We have a friend that's gonna play with us tonight … the Jimi Hendrix of punk rock guitar,” Morris said.

Denney took the stage, and the now five-piece musical outfit launched into a phenomenal rendition of the Weirdos' track, “Solitary Confinement.” The only sight more refreshing than witnessing 50-plus-year-old punks tear the roof off a sold-out House of Blues was watching leather-clad, pre-pubescent teens sing along with 'em.

Then, it was out with the old school and in with new, but not before an appropriately attired “bro” took the stage and “bro”posed to his girlfriend in front of the anticipatory crowd. A sweet gesture indeed, had it not already been done during the recording of the Dropkick Murphys' Live on Saint Patrick's Day album.

“Bro”posals aside, mayhem ensued as Pennywise took the rock reigns and blasted through a set incorporating songs spanning their entire musical career. Despite the lackluster sound, the crowd kicked, spit, punched and screamed their way through tracks such as “Fight Till You Die, “Can't Believe It,” “Perfect People,” “Society” and the anthem for flat-billers the world over, “Bro Hymn.”

As a welcomed respite from the musical monotony, Greg Graffin, Brett Gurewitz, and Jay Bentley, all of Bad Religion, in addition to Greg Hetson (Bad Religion/Circle Jerks), made a guest appearance long enough to blast out “No Control” and “21st Century (Digital Boy).”

Keith Morris also returned to the stage to cover the Black Flag song “Nervous Breakdown,” and the band's frontman of yesteryear stayed true to form, exhibiting both the youthful vigor and vocal prowess of his late-1970s self.

The crowd appeared all too intent upon the headliner and seemed entirely unappreciative of the accomplishments and history inherent to Morris' mere presence.

Thus, when Pennywise guitarist Fletcher Dragge exclaimed, “We're gonna be producing albums that sound the same over and over again, 'cause that's what you want,” it came as little surprise the fans responded unanimously with fervent screams.

There is indeed much to be said for both loyalty and consistency, however, the latter fell far short of making for an excellent show. Were it not for the Circle Jerks' exceptional performance, a guest appearance by Bad Religion and a speed freak that spoke gibberish and danced about the stage in a skirt (Fletcher claimed this was his friend that picks up dog shit off his lawn for $10 – no joke.), the show would have been entirely mediocre.

But then again, mediocrity doesn't appear to hinder either album or ticket sales, so go figure.