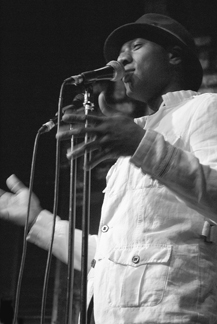 I'm a new fan of LA-based rapper/singer Aloe Blacc. Having spent the past 16 years of my life on the East Coast, Aloe was not on my radar. A new friend invited me to his performance at the Natural History Museum's First Fridays series in February. I was hooked.

He sang, rapped and played the trumpet as I stood, surrounded by big stuffed mammals behind glass walls. After rapping for 10-plus years, Blacc's incarnation as a singer is brand new.

I'm glad he decided to expand his wings. He is too.

“Right now I like singing better because I feel more comfortable writing songs where I'm singing,” he says. “I can be concise, tell a story and complete it without being too wordy. As an MC at times I felt I was saying things just to fill the space. A lot of stories don't require a lot of words. If you're specific and poetic, you can do it with very little.”

The next time I laid my eyes on Aloe was in mid-February at Santa Monica's Temple Bar. In honor of Black History Month and Valentine's Day, he sang a series of love covers by Sam Cooke, Marvin Gaye and more.

“What happened to love songs?” he asked me over the phone a few days before his show. “We need to love each other.”

Fast forward to this past Sunday at B.B. King's. I was front and center for another stellar set. He commanded the stage like a veteran, welcoming the audience with warm trumpet flutters, backed by the sounds of DJ Exile, the other half of Blacc's hip-hop group, Emanon.

Pulling from his Panamanian roots, Latin flavors pepper Blacc's melodies. Not surprising, dancers flocked to the dance floor, anxious to shake off their growing restlessness.

“Are You Ready,” “Bailar” and “Dance for Life” seem to be a few of his concert favorites, all pulled from his July '06 debut Shine Through (Stones Throw). On this night, he treated listeners to a special selection dedicated to his mother, “Mama Hold My Hand.” It's a sweet statement about growing up, and then old.

For the finale, Blacc always ends on a high note. “I'm Beautiful” is dedicated to his niece. It's the ultimate self-esteem jump-starter, and my favorite song.

When I first spoke to Blacc, I asked him what he hoped people came away with when they left his shows, and he replied: “I want people to have a new understanding of who I am and what I do. Fans were slow to accept my singing. Now they recognize that it's me wanting to step into this field of being a musician and not just an MC. I'm creating new thoughts and new ways of expressing emotion. I want people to leave my shows happy and rejoiced and go out and spread that happiness and joy. Pay it forward.” —Jessica Koslow