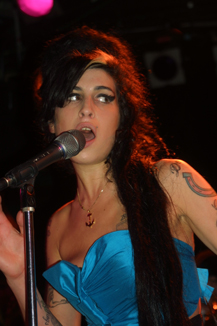 Amy Winehouse swooned the Roxy in a glamorous and intimate, celebrity- studded evening (with the likes of Bruce Willis, Courtney Love and Fab Moretti in attendance). As sober as could be expected after her recent break-up and bad girl behavior, Winehouse cha-cha'd and pranced about as the crowd of mainly 21 to 30-year-old gals and gays proclaimed their love for her.

Opening act, Chris Stills was a little mellow to be paired with the sexy powerhouse, but he had a strong presence nonetheless and received a solid reception. He played a short set of cool reggae jams and mellow rock beats sometimes hitting huge falsetto peaks.

After waiting 40 minutes between sets, sweaty fans were greeted with the overhead sounds of the Chiffons “He's So Fine” as the curtains rose to reveal the '60s girl group inspired act. Winehouse looked so nostalgic, dressed like a true lady in her electric blue party dress that she nearly popped out of during “Addicted” and hovering over her, a towering beehive hairdo to boot.

Fresh from her venerated performance at South by Southwest in Austin and recent Brit Award for best British female solo artist, Winehouse showed her contemporary songwriting talents and proved her second release Back to Black would top charts in the states as it has in her homeland.

The tipsy yet sultry chanteuse broke it down candidly between songs, telling fans how proud she was to be there and spilling feelings on relationships testifying that, “When you go to sleep, you can't help what creeps up in your dreams.”

Her dainty frame stood strong above her leopard heels as she sang soulful mature tracks mostly from her recent album. She did mix in “You Send Me Flying (Cherry)” from her stripped-down first release, Frank.

Fully equip with hand claps and soaked in soul, Winehouse and her backup singers made a smooth transition from “He Can Only Hold Her” into a stunning version of Lauren Hill's “Doo Wop (That Thing)” as they traded versus and came back together for a chorus that revitalized the song.

Winehouse said her last song was coming but fans knew better since her hit “Rehab” was yet to be heard. The petite 23-year-old firehouse left the stage and returned to sing what she called “one of my favorites from last year”. Although some fans were confused by the encore cover song, “Valerie” by the UK group, the Zutons, it went off seamlessly.

To close the show, the vixen gave everyone a performance of “Rehab” intoxicating enough to send everyone there. Those who attended this one totally lucked out because Winehouse canceled her show at Spaceland scheduled for the following day.
Article posted on 3/27/2007
This article has been viewed 1569 times.