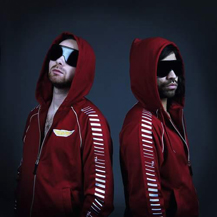 I know what you're thinking; this sounds like just another fad showcase highlighting deals on Pabst and who can look the most heroin chic. I thought so too, until all of my critical assumptions were quickly and repeatedly disproved by the sheer energy and experimental variety of all three performances.

UK rockers the Scanners opened the evening with an aggressive instrumental style that was only slightly tempered by the main vocalist's charming air of femininity. Screaming words of lost love punctuated by catchy choruses of “oh's” and the occasional Brit “can't” or “not,” their commitment and passion was contagious.

Pocket-sized pistol the Lady Tigra quickly filled the now conspicuously empty stage with her electronic bubblegum rap. Armed with a microphone, wide eyes and a flirty smile, she sang coyly about being a sex-driven player over '80s pop beats.

The Norwegian boys of Datarock concluded the evening of digital fusion in matching red tracksuits and geriatric sunglasses. Influenced by Devo and the Talking Heads, these four wind-up toys never ceased their exaggerated claps, playful beats and choreographed sense of purpose that was inescapably charming.

If you don't believe me, ask the girl whose bra ended up on stage halfway through the set. Drum machines and keyboards were fundamental to Datarock's shtick, but metal power chords proved these boys still knew their instruments.

Concluding with the best impromptu closer I have ever seen, Datarock halted its stage exit as Bill Medley's “(I've Had) The Time of My Life” blared on the house music system. Turning in their compulsively entertaining tracks, they led the entire club in heartfelt song and created a campfire moment that perfectly sums up the band's magnetism.

For stoking the fire of current music and giving hope to a redefining of the word “indie,” all I can think to say to these bands is: “I've had the time of my life, and I owe it all to you.”