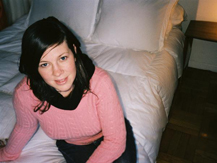 City Beach, the debut solo album by Luscious Jackson co-founder Jill Cunniff, was released late last month. But for our financially strapped readers, a single free copy has recently been made available for pick up on the shoulder of the 101North by Silver Lake Boulevard.

That is where, after three increasingly damning listens, I finally submitted to catharsis and ejected the disk from my car window. The album is quite at home amongst the discarded cigarette butts, blown out tires and mangled road kill with which it lays.

If you feel I am being too harsh, consider yourself amongst the blessed majority that have not had to suffer through the incomprehensible mix of pop, trip hop, reggae and ska that make City Beach feel like a hopelessly outdated relic from the Clinton years. Now add lyrics that were jotted down in a Hello Kitty notebook with a troll doll pencil, and you will start to get a sense of what we are dealing with.

Take the line that opens the album: “Here's a song for lazy girls and laid back boys\who never quite outgrew their toys.” We also get such sage advice as “When it gets tough, pick yourself up and don't give up” and such deep insights as “The subway's such a lonely place.”

So it was with trepidation that I ventured to Cunniff's Thursday night show at the Hotel Café, a charming Hollywood venue with a laidback feel and a consistently wonderful sound. But to my surprise, Cunniff actually managed to salvage a pretty decent show from the wreckage of these songs.

Playing a stripped down set with only minor accompaniment, her truly remarkable voice and gifted instrumental work almost made the hour-long gig tolerable. Thankfully, she did not relegate herself completely to the desolate City Beach .

Such Luscious Jackson hits as “Ladyfingers” and, of course, “Naked Eye” showed what Cunniff is capable of when the pen is taken out of her hand. And her easy, inviting stage demeanor quickly engaged the large crowd.

In the end, though, the show had the feel of watching a great actor in a terrible role. They are always fun to watch, but you hope to God that, next time, a friend is kind enough to take them aside and tell them to wait for something better to come along before jumping back into the limelight.
Article posted on 4/3/2007
This article has been viewed 1295 times.