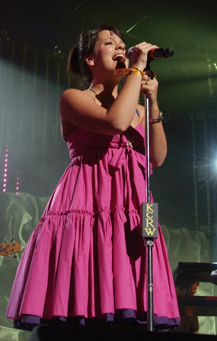 Lexus knew what it was doing. Other than if Los Angeles were to host the national MENSA convention, there is rarely a gathering of cognoscente (and their disposable income) like the confluence of National Public Radio listeners and supporters of KCRW at the Sounds Eclectic Evening.

While most of the acts got their first airplay on KCRW, that the majority of the acts have now found outlets on “SNL,” “Grey's Anatomy” or commercials is a testament to the cutting edge prowess of the NPR DJs. If Malcolm Gladwell were in the audience – and given who was there, he may very well have been – he would call them, and us, mavens of music.

Ironic, then, that the least well known of the players were the obvious highlight of the evening: Rodrigo Y Gabriela. Introduced by Anne Litt (the music supervisor of Little Miss Sunshine ), this Mexican duo followed the indie rockers Cold War Kids' anxious vocals (e.g., “Sometimes I feel like a motherless child”) and antebellum anthems with complete auditory silence.

Fitting as no words could describe their fingers that dashed across their guitars like digits on a keyboard during an angry 3 a.m. e-mail. They brought to mind “The Devil Went Down to Georgia,” not because of the rockabilly song – their style is thrash metal/flamenco (really) – but because Gabriela plays as a woman possessed.

Ending with, inarguably, the most stirring rendition of “Stairway To Heaven” to grace a stage, they brought the audience to its feet, hypnotized by the close up of their fingers on the Jumbotrons. I say fingers, but it's impossible to tell what's on the end of their hands as they were a mere blur throughout the exhaustive set.

Travis, the special guest that followed, didn't stand a chance. Bringing to mind Coldplay, the band's acoustic guitars could not compete with the dueling strings that came before.

Things picked up a bit when Lily Allen took the stage in one of her signature pink frocks, commanding the auditorium for such hits as “LDN,” “Smile” and the rest, all for shits and giggles – the former from her acerbic lyrics, the latter from her coquettish laughter telling the audience she had done too many Jäger shots or ending the set with the Disneyfied anthem “Alfie.” Days later, Allen would announce she was canceling all of her American tours (except Coachella, don't worry), so seeing her here was an added bonus to a night of bonuses.

The other performers had their moments – Breakstra came out with “I want to hear you say Fuck Bush!” and channeled James Brown in all his sweaty glory; Bitter:Sweet opened the concert with music that was just that.

By the time the Shins arrived after three hours of concert, they needed to bring the Red Bull equivalent of music. They did not.

Not just because the group's songs are oftentimes understated, indeed – their most famous, current rotation, “Phantom Limb,” was grunged up a bit – but because they actually sound better on their albums. You expect a group with a name like that to bring the audience to its feet.