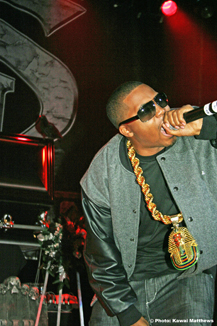 N-A-S are the letters of his name. Backed by a stage set with a coffin (complete with ravens perched on top) where DJ L.E.S. and his turntables hid, Nas announced, “Welcome to the funeral!” as he sauntered onto the HOB stage, alluding to the title of his seventh and latest studio album, Hip-Hop Is Dead.

Nas is one of the more interesting characters in hip-hop today. Having burst onto the scene on Main Source's “Live at the BBQ” and stunned hip-hop fans with his 1994 debut Illmatic , the Queensbridge MC has garnered respect as a lyricist with insightful perspective and a socially conscious mind, though he has been known to contradict himself, too.

Nas has been plagued by controversy his entire career. Puffy. Steve Stoute. Then, in 2001, Nas and Jay-Z, friends from back in the day, got in a heated and high profile battle on wax. Most heads agreed that Nas' “Ether” trumped Jay's “Takeover,” who retaliated but went too far with “Super Ugly.”

Then in a surprising move, after Jay-Z was appointed president of Def Jam, he signed his one-time nemesis, and resulted in Hip-Hop Is Dead as Nas' Def Jam debut.

It's been a helluva ride for “God's Son.” Like a well-traveled road warrior, Nas delivered an impassioned solo set to a hype L.A. crowd. Mixing new tracks like “Carry On Tradition,” “Can't Forget About You” and “Black Republican” (sans Jay-Z) with classics like “N.Y. State of Mind,” “It Ain't Hard to Tell,” “Life's a Bitch,” “If I Ruled the World” and “Oochie Wally,” Nas proved just how varied and impressive his catalog is. Other highlights included “One Mic,” “Get Down” and “Made You Look.”

Throughout the night, Nas remained solo onstage for the most part, a rarity at hip-hop shows. No extras needed tonight.

The only surprise was when Nas brought KRS-One out. Seeing the two onstage, bridging the rap generation gap, was the best reminder for everyone in the house that unlike the title of Nas' CD, hip-hop is not dead.
Article posted on 5/8/2007
This article has been viewed 1172 times.