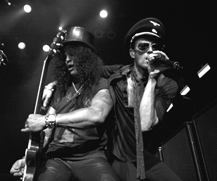 Kicking off their Re-Evolution tour, supergroup Velvet Revolver pounded out a sizzling set at the historic Avalon. Finally unveiling several new tracks from their forthcoming (and much anticipated) sophomore album , Libertad , the evening had a lot to prove.

A successful second album would officially solidify the band as more than a novelty act that was riding on the hype of its famous members. The set consisted of old, new and borrowed music.

The audience's thrilled reaction to covers of “Vasoline” and “Used to Love Her,” from Stone Temple Pilots and Guns N' Roses respectively, proved that the fans in attendance weren't quite ready to let go of the semi-defunct bands, which combined, make up Velvet Revolver.

After a few songs, most of the band was shirtless, revealing singer Scott Weiland's dangerously low pants. Lead guitarist Slash never broke character, hiding his face underneath a mop of curly black hair and iconic top hat – the same look he's been rocking for decades.

The low and brooding guitar riffs in “Slither” and ominous drums in “Fall to Pieces,” both songs from the band's Contraband debut , moved the crowd. New songs “Let it Roll” and “She Builds Quick Machines” brought the energy and attitude of classic GN'R, along with the heart of STP, to the stage.

To the contrary, “The Last Fight” found Weiland trading in his signature megaphone for a pair of maracas and swapping his dance-like-no-one's-watching performance style for a mild and relatively serious foot tapping at the mic stand. With a haunting chorus and soulful riffs, the song is Velvet Revolver's most melodic to date.

An emotional milestone of the set came during one of two encores: Weiland's dedication of Pink Floyd's “Wish You Were Here” to his late brother, for whom the evening was a charity benefit. Before performing the entire song with his back to the audience and facing a screen that projected home videos of his brother who died of substance abuse, Weiland announced that he, himself, has been drug-free for three and a half years. As Slash shredded a double-neck guitar, a somber Weiland seemed relieved to put his reckless years behind him.

Though these former party boys have grown up and matured, they still rocked like never before, assuring fans that Libertad will be a future classic.
Article posted on 5/15/2007
This article has been viewed 1274 times.