Election - Musicians: In This Election Everyone With A Guitar Seems To Want A Say 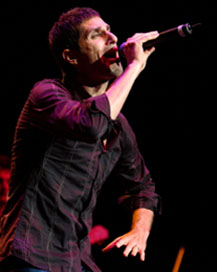 In the notes to his new album, The Revolution Starts Now, roots rocker Steve Earle writes that Nov. 2 is the date of "the most important election of our lifetime" and that he and his band "desperately wanted to weigh in, both as artists and as citizens of a democracy."

When it comes to using music to get a political message across, Earle’s words are an article of faith that could have been spoken by any number of artists, from Bruce Springsteen to Kenneth "Babyface" Edmonds, from Will.I.Am of Black Eyed Peas to Justin Sane of the punk-rock band Anti-Flag.

In this election, pop music and partisan politics are more intertwined than ever before.

Music has been instrumental in social protest going back at least as far as 1960s civil-rights marchers singing Pete Seeger’s "We Shall Overcome." But with debate about President Bush and the war in Iraq the catalyst, it seems everyone with access to a guitar or a microphone is having a say-so.

John Kerry supporters dominate the discourse, but a handful of Bush backers are speaking out to boost voter turnout and influence the election.

When pop artists band together to take a stand, it has usually been a comfortable, nonpartisan one, such as opposition to African famine with Live Aid in 1985 or nuclear power with 1979’s No Nukes.

This violently contested election has changed all that.

The big kahuna is the Vote for Change tour, an ambitious undertaking that will send more than a dozen artists to 28 cities in swing states crucial to the tight presidential race. The tour launches at five venues in Pennsylvania on Oct. 1, with Springsteen and the E Street Band, R.E.M., and Bright Eyes playing the sold-out Wachovia Center.

"This doesn’t just cross the line into electoral politics," says Springsteen biographer Dave Marsh, who edits the newsletter Rock and Rap Confidential. "This is not Rock the Vote. This is specifically: You should vote for this candidate. And the reason you should is the other guy is a very bad guy."

The tour is only one of many agitating initiatives.

There’s "Rock Against Bush, Vol. 1" and "2," compilations featuring rockers such as Green Day, No Doubt and Sum 41 put out by the Washington organization PunkVoter.com. There’s the "Future Soundtrack for America," whose 22 artists range from Tom Waits and David Byrne to indie pop Death Cab for Cutie.

And there’s "Wake Up, Everybody," a rerecording of the Harold Melvin & the Blue Notes classic featuring Missy Elliott, Jadakiss and Eve. The song anchors an album of the same name due on Sept. 16 with tracks by the Roots, Marvin Gaye and Yoko Ono. Another ACT benefit, it was put together by Babyface and Russell Simmons, who has been registering young voters at his Hip-Hop Summit Action Network events around the country.

While none of these initiatives is directly affiliated with the Democratic Party, most of the artists are open about their goals. "Hey, it’s called Vote for Change – we’re trying to change the current administration. There’s no need to be coy about it," Springsteen has said.

"I totally don’t agree with the way this administration has run things," says Edmonds, who will play with John Mellencamp on the Vote for Change tour.

Country and gospel acts such as Travis Tritt, Lee Ann Womack, and the Blind Boys of Alabama will perform at the Republican National Convention in New York next week, alongside celebrities Arnold Schwarzenegger and Dennis Miller.

But the impressive lineup – the Dixie Chicks, Pearl Jam, the Dave Matthews Band – for Vote for Change, which is expected to raise $10 million, has not been met by a corresponding pro-Bush tour.

Toby Keith, whose career took off with the post-Sept. 11 flag-waving anthem "Courtesy of the Red, White and Blue (The Angry American)," is a registered Democrat, according to his publicist. And while stars such as Brooks & Dunn and Tim McGraw have appealed to patriotic sentiments onstage, there hasn’t been a rush to support the president in public.

Ricky Skaggs, the country and bluegrass vet who has campaigned for Bush, is an exception. "This is a very important election," says Skaggs, 50.

"America is so divided. It’s like we’re at war. It really reminds me of the way the country was around the time of Vietnam. And I just don’t think that the thinking of the Democratic left-wing liberals is good for the country. I don’t think abortion is good, and I don’t think marrying gays and giving them the same equal rights I have with my wife is good. And I think if we lose, we’re going to go down a slippery slope."

But Skaggs thinks his fellow Nashville artists are afraid of alienating fans, ironically, because of the criticism the Dixie Chicks faced after singer Natalie Maines’s anti-Bush comments last year.

"A lot of people think that if they stand behind President Bush, they’re going to be counted as mean-spirited right-wing Christians," says Skaggs, who joined country acts Randy Travis and Blake Shelton for the get-out-the-vote initiative Your Country, Your Vote. "They’re afraid of losing fans."

Are the Vote for Change acts facing similar risks? "We do get a few people who send back all our records in the mail when we do something like this," says R.E.M. manager Bertis Downs. "And I’m sure there are a heck of a lot of Republicans in Bruce’s audience." A posting on BruceSpringsteen.net after the tour announcement read: "It’s official, Bruce Springsteen is a total left wing tool ... I won’t be buying any of his albums in the future, nor concert tickets."

The all-star initiatives are designed, at least in part, to motivate voters in the 18-to-35 age group, whose numbers have dwindled in every election since 1972, with the exception of the 1992 race.

And some – like the underground hip-hop Slam Bush tour, which plays in Philadelphia on Sept. 1 – will naturally attract a young audience. That can’t be said, however, for the Vote for Change lineup, stocked with wrinkled rockers like Springsteen, Mellencamp and Bonnie Raitt.

Even if these initiatives raise money and register voters, what’s the likelihood that they’ll affect the election? "With how close the election was last time?" asks Steve Earle. "What I’m doing, what Russell Simmons is doing, has a chance to reach people who haven’t been involved ... If you reach one person, that’s enough."

Danny Goldberg, head of Artemis Records and author of Dispatches From the Culture Wars: How the Left Lost Teen Spirit, points to a slew of factors encouraging young voters to vote this year, from Howard Dean’s fervent Internet-fueled campaign to Michael Moore’s Fahrenheit 9/11, to the war in Iraq, "which is this gigantic big issue that dwarfs all issues."

Diminishing youth turnout, however, is "a complex problem that’s not going to be turned around by a series of concerts," says James Stroupe of the University of Virginia’s Center for Politics. Voting is learned at home and at school, and celebrities urging people to vote "may create the sense that this is the chic thing to do this year, but it’s not likely to create sustained behavior."

And even this year, just "because large numbers of new voters are registered doesn’t guarantee they’ll make it to the polls," Stroupe says. "If young people could go into a room and all vote at the same time, we might be successful in getting them to vote."

Jonathan Trichter of Pace University says that even if left-leaning voter-registration efforts are successful, they will likely be countered by less celebrity-studded efforts from the right. A 2004 Pace poll found that among voters who had registered since 2000, 4 in 10 were evangelical Christians. "The churches are doing a better job of preaching to the choirs than the rock stars," Trichter says.

Mindful of the backlash, many artists on Democrat-leaning tours are toning down anti-Bush rhetoric. "We’re mainly trying to point out our problems with the conservative right," says Justin Sane of Pittsburgh’s Anti-Flag, who will play in Philadelphia on the Rock Against Bush tour on Oct. 7.

"We’re trying to say that your vote could be the difference between you being drafted, and your feet in a pair of combat boots in the desert, or not."

The Vote for Change tour won’t include a lot of speechifying or Bush-bashing, R.E.M.’s Downs says. "These people are going to be up there playing music. That’s what they do."

"I don’t agree with the preaching hate thing," says Edmonds. "And I can’t even tell people how to vote. I know where I stand, and I think the country needs a change. But this is mainly about telling people that they need to go out and be heard. There are three things you need to do in life: You need to breathe, you need to die, and you need to vote."