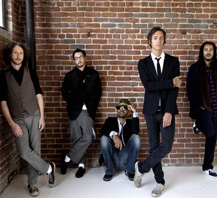 Warped isn’t the only tour coming to town over summer, and if these shows are any indication, it has some heavy competition looking to claim its title as the best package tour around. If punk rock and emo aren’t quite your thing, there’s a little something for everyone still coming, provided you like hard rock, hardcore, metal, metalcore, or … man, when is Beyoncé going to do another tour already?

If ever there was a show that promised to be more magical than Incubus at the Greek, I’d call that show a liar to its face and probably slap it for being so bold-faced in its untruthfulness. Incubus is a magical band, and its members are the undisputed masters of creating a sonic atmosphere with their respective instruments.

Frontman Brandon Boyd is magical because, Jesus Christ, that man can friggin’ sing like nobody’s business. The Greek itself is magical because intimate open-air venues in the summertime totally own over closed-in arenas.

Hellogoodbye is funny because you feel like its members should be a guilty pleasure when you listen to them, but once you pop in that CD, all the self-consciousness about listening to no-excuses-pop just fades away.

Maybe it’s the fact that the band backs up its infectious-like-the-plague sound with an impressive technical understanding of musicianship, or maybe it’s just that you can’t possibly stay in a bad mood while saying “shimmy shimmy quarter turn.”

Deftones have been making music for so long now, and admittedly, they’ve had their ups and downs with that. Not every album has been totally stellar, but to be fair, not every album is going to be a White Pony or Around the Fur.

Regardless of what you think of their new material, and for the record their newest album isn’t half bad, the ’Tones know how to own any stage that they walk out on. They may be getting older, but Deftones still rock just as hard as ever, and Chino Moreno will continue to make people wonder how a human voice can make those kinds of sounds.

Come on, I know Social Distortion plays eleventy billion L.A. and O.C. shows a week, but this one’s special. Social D is Hootenanny, so you can rest assured the band will make sure everyone who comes leaves satisfied.

If nothing else, even if rockabilly totally isn’t your thing, it’s worth it to go and try to pick up on the punk rock Vargas girls who frequent these gigs. Even though they probably belong to Mike Ness.

Admittedly, the lineup for Ozzfest this year isn’t quite as impressive as those of years prior, but come on, it’s free! Nothing beats free stuff!

Well … Ozzfest being at a venue that isn’t in the middle of nowhere and still being free would totally beat that, but still, I’ll take what I can get. And Lamb of God is always worth the price of admission.

Also worth checking out are of course Ozzy himself (still kicking!), Lordi, Mondo Generator and In This Moment. Now watch parking end up costing $50 a car.

QUEENS OF THE STONE AGE

Queens of the Stone Age are quintessentially cool mofos. Their level of cool output is proportional to that of the magical output of Incubus. Queens incorporate everything that was awesome about the last 40 years of rock into their style while bringing a modern edge and pop sensibility to it as well.

It’s kind of funny sometimes how easy it is to forget that seven years ago, everyone and their mom was into Linkin Park. When Hybrid Theory was released, you were the undisputed social outcast if you don’t know every word on that album from start to finish verbatim.

It’s also kind of funny how, even though the hype has died down considerably since they first broke, just seeing these guys live reminds you unashamedly of how in love with that band we all used to be and evokes all kinds of warm and fuzzy nostalgic feelings. Add in the fact that they’re bringing out one of the most eclectic groups of heavy-hitting bands around, with My Chemical Romance, Taking Back Sunday, HIM, Placebo, Saosin, Mindless Self Indulgence and the Bled, and this has the makings of being one of the best tours of the year.

SOUNDS OF THE UNDERGROUND

Every Time I Die is one of the most amazing live bands a person can bear witness to. We’ve been there and done that with GWAR and all, but Every Time I Die never gets old, because you never get the same performance out of them twice. Add in Shadows Fall, Chimaira and Darkest Hour, and this could very well be the loudest festival tour of the summer, if nothing else.

Granted, I said Incubus was magical earlier in part because of Brandon Boyd’s amazing vocals, but going by that standard, Evanescence frontwoman Amy Lee is the stuff dreams are made of. Arguably the best female vocalist in rock right now, Lee’s ability to match her evocative vocals with a dynamic theatrical stage presence never fails to make for a compelling live show.

Now add in Korn, Atreyu, Flyleaf and Trivium, all of whom put on intense performances in their own right, and we’ve got one of the best shows to mark the end of the season.