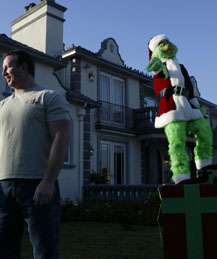 More than 100,000 revelers have journeyed each holiday season from around the San Francisco Bay area to behold Alan and Bonnie Aerts’ spectacular Christmas display in Monte Sereno, Calif. – a surfing Santa, a petting zoo, dazzling lights and much, much more.

This year, there’ll be none of that. Just a large, lonely, custom-made animated Grinch that points and plays, "You’re a mean one, Mr. Grinch."

The 10-foot-tall singing Grinch is a humorous slap at the Monte Sereno City Council for passing an ordinance that Alan Aerts thinks will make the wildly popular Christmas extravaganza undoable. So he’s not doing it.

"It’s my quiet, little ‘This is what I think of your policy,’" Aerts said. "And if it happens to point at a certain neighbor’s house, so be it."

That neighbor is one of those who was sick of the holiday traffic and people jams on their otherwise serene cul-de-sac.

"I’m delighted," said Le Nguyen, when told there will be no parade of cars on his street this year. He is, by the way, the across-the-street neighbor at whom the Grinch may "accidentally" point. "Finally," he said, "I can enjoy the song ‘Silent Night, Holy Night,’ instead of ‘Noisy Night, Holy Night.’"

The Christmas jeers started a few years ago when Aerts – an amazingly charitable fellow – began to expand his display to Disney-like dimensions. It became a Toys for Tots drop-off point. And the past two years, he said, it was the top spot in Santa Clara County for donations. The couple also kicked in a matching $5,000 in toys on their own. They also spent more than $7,000 on gourmet cookies and hot cocoa for the visitors.

But those are just some dashes of sugar and spice on the piece de resistance: A moving, blinking, sparkling phantasmagoria of a Christmas display, which prices out at more than $150,000 for the equipment alone.

Here are some of the things you won’t see this year. A tranquil Nativity scene. A not-so-tranquil array of life-size dolls singing Christmas carols. Green aliens holding up stockings and meeting Santa. A toy train running down the sidewalk. Giant candy canes lining the driveway.

Oh, and a snow machine.

Although it all sounds like great fun – and it’s been featured on regional newscasts around the country as well as NBC’s "Weekend Today"– all was not well in Monte Sereno’s North Pole south.

The little rich town has about 3,800 well-tended residents. Estimates for the Christmas visitor count the past two years have been 100,000 to 120,000 from Thanksgiving to the day after New Year’s.

Quick division, using 100,000 for the number of revelers, shows that 26 times the city’s population tramps through the small cul-de-sac during the Christmas season. OK, so maybe you don’t have to be a Grinch or even a grump to get tired of that.

"As soon as the sun goes down," Nguyen said, "it’s rush-hour traffic, literally bumper-to-bumper. It’s just not safe; it’s too much. It’s something for the city to do in a park, or in San Jose."

By a 3-2 vote, the city council agreed, deciding late last year to force the Aertses – or anyone else, for that matter – to apply for a permit before holding a large-scale event.

Mayor Erin Garner voted against it. "I thought it was appalling that we did what we did," he said recently. "It was an unnecessary obstruction to a good community service that Alan provides. It will be a crying shame if he doesn’t put his holiday lights up this year."

And for the first time, he didn’t decorate for Halloween this year, either. One disappointed family told him they’d driven down from Concord, Calif., to see the lights and trick-or-treat, Aerts said. Others left notes in the mailbox. "Is everybody OK? Is somebody sick in the family?"

Alan and Bonnie Aerts will deck the halls inside their home for Christmas but will not go through the permit process because they feel the city will be too arbitrary in its rules.

Aerts said one councilman, whom he wouldn’t name, told him twice that he wouldn’t allow the festivities to include the Toys for Tots drop-off or the free cookies and hot cocoa – which provides a chance for the family to mingle with the visitors.

This season, the Aertses will simply continue to concentrate on their charitable works – which are considerable. Alan Aerts has done well for himself in his many businesses, which include a Pepsi franchise and a vending machine company. But he and his wife also devote scores of hours to charities – and donate, he estimates, half of their income to them. Last year, they donated all of their business income.

Still, good works do not get one a special Christmas decorations dispensation, especially if it attracts thousands of cars during the course of the season.

So, for Councilman Mark Brodsky, the decision to regulate was fairly clear: "It’s simple," he said. "I work very hard. When I come home at the end of the day exhausted, I would be shocked if my neighbors had turned my neighborhood into Disneyland, if there were 26,000 cars on my court. It’s just too much."

US News
California gunman was ex-Marine who might have suffered from PTSD, sheriff says
917 views

US News
Rates of 3 STDS in US reach record highs CD says
1,021 views

US News
Trump’s tax cut not for everyone: 1 million Californians will owe $12 billion more next year
2,472 views

US News
Starbucks will close stores to provide racial-bias training to 175,000 US employees
1,757 views