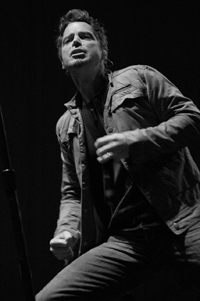 Sun, sand and some of the best rock bands of the year together for one day? Needless to say, the KJEE Beach Ball was everything one could ask for in a radio station-hosted show and more. Plus there was beer. Lots of beer.

Smaller and more intimate than any of the other SoCal radio station festival concerts, KJEE still pulled out some big guns for the event, making the package deal even better than seeing some of these bands headline to boot.

The first band up, Plain White T’s made their presence on the stage known despite their early set time with their distinctively heavy-but-fun pop punk style. L.A. locals Cold War Kids stole the first half of the show, as they are wont to do in any setting and on any bill they’re placed on, but fellow indie scene favorites Shiny Toy Guns and Silversun Pickups proved to be worthy competitors for the Kids’ title.

Back from touring obscurity, the Bravery reminded everyone how, despite all its criticisms, the band’s first album is filled with memorable songs that outshine most of its contemporaries. With their new material being catchier than ever with a marked maturity, the New York boys showed that they intend to keep themselves on big stages for the foreseeable future.

Sum 41 has been out of the spotlight for a long while now as well, but unlike the Bravery, the group didn’t use that time to grow up or get any better musically. Next, please.

Not that Queens of the Stone Age would have trouble following any band, but after Sum 41, Queens just seemed exponentially more awesome than usual. Despite his boozy charm, Homme sounded unfalteringly true to his band’s albums throughout their set and should have great canvases and blocks of marble that bear his likeness as a rock god.

With a stoic presence that would own any stage big or small, Chris Cornell closed the night with songs spanning his musical career. One of the definitive voices of rock and easily one of its most technically skilled vocalists as well, Cornell is the rock equivalent of that bottle of wine that’s older than you are, has aged more gracefully than you could ever hope to and tastes even better now than it did 10 years ago.

Needless to say, Cornell is what every band who went on before him should aspire to be.