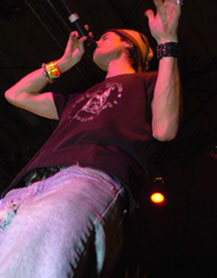 Georgia krunk met with L.A. funk at the Dungeon Family Reunion concert at Qtopia, in Hollywood. Dungeon family members Rich Stites, lead singer of The Circle, and Big Gipp, lyricist from the Goodie Mobb, performed on the same stage for the first time since late 2000.

The night began with DJ Raphiki of Power 106 spinning a fantastic hour-long set of hip-hop, soul and break-beat tracks while b-boys and b-girls warmed up the dance floor. MC of the evening Black Silver of the 2,000 Crows then took to the mic, introducing The Circle to the stage.

After some raucous rhythms from DJ Fat Jack of the Freestyle Fellowship, Black Silver took to the stage again, introducing Big Gipp of Goodie Mobb.

Big Gipp claimed the stage in grand crunk fashion, like the grand godfather of krunktastic, stankified microphone wizardry that he is. He owned the microphone with his regal rhapsody, leaving even the most spoiled underground hip-hop heads, celebrities and industry faithfuls shouting for more.