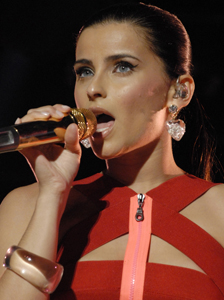 When Nelly Furtado first arrived on the music scene, I pegged her as a bit of a goody-goody, the type of pop artist whose CD you could buy your nine-year-old cousin and not feel guilty about corrupting the poor child’s mind. I mean, she sang about birds and strummed a guitar on TRL, right?

Upon hearing that she garnered significant criticism for eroticizing her image, à la Britney Spears, in order to sell more copies of her latest release, 2006’s Loose (which boasts the mega-hits “Promiscuous” and “Maneater”), I understandably decided to leave Ms. Furtado on the shelf while Christmas shopping for the little ones.

It should be no surprise then that I spent the days leading up to the L.A. stop of her “Get Loose” tour wondering just how loose did this girl actually get? I’m pleased to report that, despite the racier material, Furtado is still very much a prudish artist. And, in this case, that’s a good thing.

Opening act Kenna’s soulful yet slightly drab performance only made the packed audience that much more antsy for their headliner, and Furtado delivered, even amidst glitzy, disco-inspired stage design that was more distracting than anything. Furtado began and ended her show with danceable numbers like the aforementioned Loose hits, as well as the bouncy, chart-topping single “Say It Right” and “Turn Off The Light” from her 2000 debut Whoa, Nelly!

Treating each song with individual care marked by choreographed dance routines and various wardrobe changes, Furtado tactfully placed her slower ballads such as “In God’s Hands” and “Try” in the middle of the concert, giving the night a wonderful sense of balance. I was especially enamored with her acoustic rendition of Gnarls Barkley’s “Crazy.”

In fact, the crowd was on its feet throughout most of the evening as Furtado often touched hands extending from front row, threw out memorabilia and encouraged fans to sing lyrics along with her. She had me screaming in Portuguese during her soccer anthem “Forca,” and frankly, I’m still not entirely clear on the exact meaning of what I was yelling.

All in all, seeing Furtado perform in person helped me realize that her newfound sexuality hasn’t overshadowed her ability to make quality tunes but, rather, has added a more grown-up dimension to her artistry and transformed her into quite the well-rounded musician. Sure, she may be a little looser than she used to be, but Nelly Furtado still knows how to keep it classy.
Article posted on 7/5/2007
This article has been viewed 1119 times.