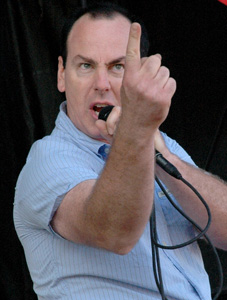 No matter how many times you’ve gone to Warped Tour, there’s no way to fully prepare for when it rolls around again the next year. It’s always going to feel like the first day of school.

When you go to a lot of rock shows, you end up running into a lot of the same people over and over; whether it’s the musicians, techs, merchies, press, promoters or just the fans. As big as Los Angeles is, it tends to be a very small circle of people who fully commit themselves to this lifestyle, and it’s easy to form a circle of friends around that. The one place you can always count on seeing everyone you know at once is at Warped.

As seems to increasingly be the case every year, I was initially shocked at how old I felt walking around Warped in Ventura, which is saying a lot since I’m admittedly just barely over legal drinking age. It feels like the crowds get younger every year, and my ability to make sense of these kids’ thought processes continues to fade. Like, I’ll never understand why 14 year olds know or care so much about what Jeffree Star is doing or why they listen to Cute Is What We Aim For.

As easy as it is to sit on my proverbial lawn, hose in hand, being aggravated and sneering about the way things used to be, I realized that what’s great about Warped is being with those friends you wouldn’t see otherwise. The members of the now defunct Acceptance will always be some of my favorite people in all existence, but I hadn’t seen guitarist Christian McAlhaney since March 2006, before the band broke up. Now McAlhaney is out on Warped playing with Anberlin, and I couldn’t be more stoked to see him in action again with such an awesome band.

Equally awesome bands that I hold in the highest regard – Bad Religion, Chiodos and Paramore – need to be on everyone’s to-see list for Warped. I could easily watch all three day in and day out without ever getting tired of them, as precious few other bands know how to command a stage like they do.

The Used aren’t playing Warped anymore, but I don’t care what anyone says, this year’s lineup is full of win, and if Ventura was any indication, is going to make for the summer of a lifetime.
Article posted on 7/5/2007
This article has been viewed 1079 times.