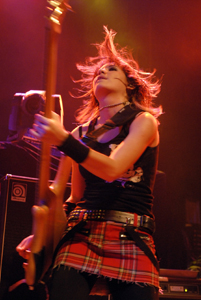 Taking the stage at the House of Blues on the Sunset Strip is no easy task, especially for a band not originally from Los Angeles. Nevertheless, Aussie transplants Sick Puppies, now firmly based in Los Angeles, took over the stage for a mere 40 minutes and ran a clinic on how to have a good time while dazzling the audience at a show.

Playing after the over-polished and disingenuous local band Red, the audience had already been poised for another consecutive let down while waiting patiently for Breaking Benjamin to come flying into the forefront of attention. A brief poll of the crowd proved that not too many people had even heard of Sick Puppies, nor took them with any degree of seriousness.

Singer/lead guitarist Shimon Moore walked out unassumingly. Armed with a giant smile on his face, he trained the audience to yell “1-2-3-4” after he would yell “one-two!”

The curious audience complied, and Moore consistently replied with a furious flurry of arena-grade riffs and fantastic fireballs of energy ripping the expectations off the faces of the crowd. Halfway through the show, Moore had the crowd jumping and heads bobbing to mostly Sick Puppies songs, flinging out the occasional cover.

Sick Puppies did what few modern bands of any genre know how to do – perform. Whereas the opening band simply sang songs, too perfectly to a backing track to enhance harmonies and vocals, Moore, armed with his super-not-so-secret weapon in bassist Emma Anzai, charged recklessly into each song with furious fire and callous disregard for slowing down. These maniacal performance tactics paid off, winning over an audience that was left wanting more (no pun intended) by the end of the set.

Anzai is definitely poised to become one of the girls of Maxim as soon as the mainstream figures out who she is. Injecting a sultry savage sex appeal while slapping her distortion-driven four-string bass, she riveted men and women alike with a devastating display of old school ’80s style “rock god-ness” (complete with the plaid skirt) and a prowess with her instrument few female bassists can compete or compare with.

Backed by drummer Mark Goodwin’s exemplary skills at keeping time and pace with two banshees of bass and guitar, Sick Puppies proved to be one bright, shining beacon in a desolate sea of average and mediocre artists.