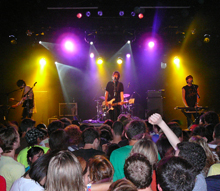 Deep, dirty bass and sirens permeate the theater, complementing the shrieks of the rambunctious crowd. It’s at this very moment the chandeliers began to tremble, and the trembling didn’t stop for the duration of the next hour.

The foursome blaze through tracks from their debut album, Myths of the Near Future – keeping the glow-stickers waving and the rockers rocking, fists held high – uniting the diverse crowd with their raw blend of music. The band members take just a few short breaks between songs to mumble almost incomprehensible praises to the crowd with their thick British accents.

Songs like “Gravity’s Rainbow” and “Golden Skans” sent the audience into an uproar, but it wasn’t until they played “Magik” that the El Rey really began to erupt. Sadly enough, this was one of the last songs played, leaving the crowd hungry for more.

Though the Klaxons played roughly every song they have to offer, the boys reminded the audience in their vaguely understandable accents that they will be back to the states in September. And from the sound of the crowd that night, so will the fans.