Ryan Adams and the Cardinals: July 19 @ the Wilshire 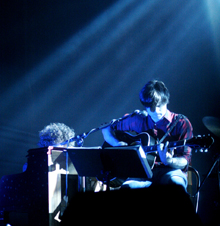 The intimate setting served as a fitting backdrop for the somber set from erratic alt-country hero Ryan Adams and his backing band, the Cardinals.

Playing against type, where the polarized singer-songwriter would usually squirm through his genre-bending catalogue, the newly sober and focused Adams delivered a poignant performance that made it feel as if you were a fly on a wall in his living room.

With a velvet vocal on his latest single “Two” and a haunting version of the classic “Wildflowers,” he moved masterfully from ballad to ballad leaving listeners parched for what was next.

The shouting of song titles from the audience was displaced by the captivating simplicity of the moment on songs like “The Sun Also Sets” and “I Taught Myself How to Grow Old.” The set was marked by a wealth of material from Adams’ most recent offering, Easy Tiger, and the three albums the prolific artist released in 2006. Although selections from his most well known material were sparse, the audience was glued to the reinvigorated former singer of Whiskeytown.

As wistful as the group was throughout the epic set of hushed lullabies and songs of love’s misgivings, the time between numbers often had Adams receiving more laughs than an average evening at The Comedy Store.

Adams is as unpredictable as they come. And the most unexpected occurred, he gave a heart-on-the-sleeve performance that never faltered in consistency or quality from beginning to end.