Warped Tour Blog 4: Currently With: Scenes from a Movie 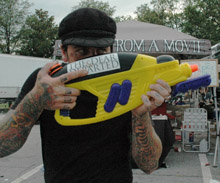 Forgive the crudeness, but I think hot weather brings out the asshole in a lot of people. Drop a group of people into 110-degree heat and 95-percent humidity, it’s a good way to tell who’s got the shortest temper and who can be the most unpleasant.

Going back yet again to nothing being for sure until it’s happening, things continue to change, and there’s always need for a plan B just in case. One band member said there was space in his band’s bus for me to ride along for a few days. Unfortunately, he neglected to OK this with the rest of his band, and I got the news that I wasn’t going anywhere with them an hour before bus call.

It’s the only time where making that walk of shame was worsened by being sober. Sometimes there’s just no way a journalist can save face.

One thing this tour continues to do unfailingly is function as an amazing opportunity to understand social politics. When forming relationships with people, there seems to be two paths that can be taken.

One can either integrate themselves into a social circle or fuse together multiple circles as a sort of makeshift family unit, or it turns into freshman year of high school all over again where no one’s going to invade your space because they looked at you wrong.

I’m no psychologist, but my theory is that the social habits stem from what each person on this tour is looking to get out of being here. For every musician committed to their art, looking to legitimately make new fans and have fun, there’s that one with entitlement issues that thinks they’re too good to be here. I can only hope that real fans of music can sift through the nonsense, even though some are better at masking it than others.

I’m riding with Scenes From a Movie right now, another group of great dudes, even if the female company they keep is kind of iffy at times. As I bore witness to, however, there really isn’t much female company at all in Texas that isn’t of somewhat ill repute.

I don’t think I’ve ever seen more girls try to latch onto boys with laminates via their mouths or more dudes try and hustle their way into a roadie gig on the spot than I did in Houston. Not that I can blame them, if I lived there, I’d try to get out by any means necessary as well.

Back to Scenes From a Movie though, what impresses me most about them is how much I’ve seen them improve day by day, even just in this short stretch of their first days on the tour.

It’s proven harder to crack into their social circle than the Photo Atlas guys though, if nothing else just because they have their own mannerisms and expressions they share with each other. To some degree, I never had any hope of cracking into that while with them, but if you can get past that, it’s easier to see the five very distinct personalities within the band.

It still wasn’t until we had an off day in Atlanta that I think I finally got to know some of them as people, sitting on an apartment rooftop at midnight looking out at the downtown skyline. As much as they and I have likewise struggled with the heat and hard work on Warped, frontman Tony Bush and I had some brief bro-age over a shared appreciation for the fact that bands on busses don’t get these opportunities to just sit around and take things in over a 24-pack of Bud Light.

The Houston show was moved indoors after being postponed the day before due to heavy rain and lightning in the morning, and I think all of us on the tour were more than grateful for that. It was a welcomed change for a day that surely made some of us wonder why we didn’t sign up to do Taste of Chaos instead.

The acoustics were awful, nothing ran according to set time and Houston has by far the most inept venue staff seen on this tour yet, but when the after-show barbecue rolls around, even the worst days feel pretty damn good.