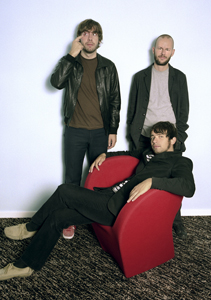 They’ve got a catchy song with “Young Folks,” I do admit. Rolling Stone calls the intro “the most infectious whistling solo since ‘Patience,’” and Peter Moren (guitar/vocals) does do the best live whistle-and-maraca-shake I’ve ever seen.

Even with the lovely surprise of Midnight Movies’ Gena Olivier, however, no one tune can carry an entire show, let alone a trio of amateur musicians whose primary draw (according to the ladies’ room pre-show) is that “Peter is so cute!” and that “they’re from Sweden!”

Interested in what could appeal to so many people – enough to sell out the Henry Fonda – I slipped on my dancing shoes and drove to Hollywood. But I didn’t dance. I winced.

I wondered, given the total lack of melody outside of “Young Folks,” if Milli Vanilli had resurfaced in the Great Hip North. Songs like “Amsterdam” and “Paris 2004” were alright – for sitting around a campfire – but the audience cheers made it sound like we were getting ready for “Gimme Shelter.”

Let me be clear, I may have lost touch with the kiddies. Peter’s cute to the girls, Bjorn Yttling’s pot-induced muttering is cool to the boys, and the drummer (John Erikkson) is the only one who actually holds the pathetic noise together, but I seemed to be the only one bothered by the band’s (read: Peter’s) tired antics.

From the rock-guitarist jump-kick to the fuzz-strum marathon followed by a rapid about-face, lips parted in midgasm, to the screaming girls below, Moren’s endless mugging might be the most obnoxious concert experience to be had today. Back that with – oh right – not much, and you can see why this girl’s PB&J remains on whole wheat.