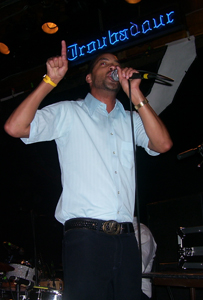 Pigeon John’s concert at the Troubadour was an absolute blast.

Sparrow Love Crew started the night off with their unique take on old school hip-hop. They took the gangsta white rapper angle a little too far, but it kept the crowd entertained.

Next was Jupiter Rising, which got the crowd moving even more with its funk-infused R&B style. The seven-piece band, including beat boxer Spencer and lead singer Jesse, had the Troubadour looking like a sea of nodding heads by the end of its set. Spencer’s style is reminiscent of Rahzel and really accentuated all the songs in the group’s set.

Pigeon John’s sense of humor is evident in all of his songs and in some of his banter with the crowd. Girls that would never bother to give him their number because he’s ugly and the topic of his nerd appeal made for frequent subject matter in his songs.

Highlights included “Money Back Guarantee,” “Deception” and “The Chase.” Pigeon John proved to be a great MC and left the crowd begging for more.