Warped Tour 2007 Blog: Currently with: Monty Are I 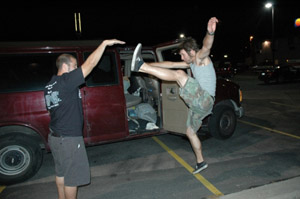 Last week’s blog definitely had a bit of a negative vibe to it and in all honesty, was kind of a downer. I’ll surely be the first to own up to that. I know it wasn’t terribly gossipy or action-packed, but a big part of being on tour is the fact that you have ample time for introspection when you’re not in the thick of the daily chaos.

We seem to have been bearing the brunt of a lot of said chaos lately, with it sometimes feeling like we see more rainy days than sunny ones, a statement that I suppose rings true both literally and metaphorically.

For the record though, the Cleveland show had us braving torrential rain, thunder, winds, hail and a tornado warning. But the show went on, much as it also has to when waxing poetic with symbolism.

I’ve jumped on with the Monty Are I guys and downgraded from my own bunk on a bus to my own bench seat in a van, but this situation suits me just fine. Despite the minimal space, these guys have done their best to make me feel comfortable all the same.

I think I’m more stoked about just being with rad dudes than I ever was about the novelty of having my own bunk on a bus. It seems like such a nothing thing, but as I said last week, genuine people can be hard to come by sometimes.

What sold me on the Monty guys and affirmed that they were worth my time and my being here was how much they remind me of my friends at home. Late nights of Texas Hold ’Em over Taco Bell, ninja fighting with broomsticks, videotaping drunken moments to replay endlessly the next day to the now sober subject’s chagrin – they brought an element of home I’ve been sorely missing lately.

As much fun as we’ve been having over fast food and gambling, the Monty guys balance this with a constant awareness of the business side of what they do, and they hustle like nobody’s business. While I was with them, the guys were constantly fine tuning something or looking for ways to be more effective in all the functions required by their collective jobs, be it as musicians, promoters, salespeople or whatever was needed at that moment.

Granted, many bands do this competently enough as well, but what’s so great about Monty is that its members are capable of upholding a professional work ethic without sacrificing the sense of fun that being in a touring band should entail.

On tours like Warped, where nothing is handed to bands, nothing is guaranteed and it’s never an easy ride, it can be easy to let the work completely overtake the fun aspects of being on the road. I’m finding how easy it is to start taking things too seriously when the numbers don’t reach that desired goal at the end of the day, especially when there’s such little down time to escape our workplace of choice.

That’s why it’s so important to be able to surround yourself with people who can do both.

I’m four weeks into this tour right now and in some aspects, the time has flown by in a blur of heat, dirt, barbecues and hotel rooms, while every now and then it hits me how long a month away from the real world and everyday living actually is. It surely gives me a newfound respect for the bands and artists that spend the majority of their time on the road, as it really is a sacrifice one makes for their passion that nobody else can understand until they’ve been there.