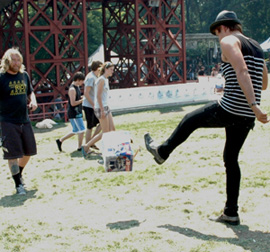 So … I haven’t been completely honest, for a few weeks now. I haven’t been dishonest by means of stating false claims, more by omission than anything. I’ve taken up a second job on the tour.

The Bleed the Dream guys have been friends of mine for a little while, and I wanted to feature them in this column anyway, so it seemed like their merch guy leaving was a prime opportunity for me to fill an open spot in their RV. I would split the duties with a friend of mine – me doing the heavy lifting of loading in and out at the beginning and end of the day and her taking care of the actual selling in between.

I get my story, I can contribute and feel like I’m earning my spot on the team, and I can pick up a little pocket cash along the way. It sounded flawless in theory, but I clearly failed to put in the most important part of the equation: the six (sometimes more) other personalities I’d be sharing space with.

I don’t want to sound whiny or stereotypically emo, but my time with them just wasn’t what I expected or anticipated. These guys have a very specific way of doing things and dealing with people and employees that I’m just not used to in all my time spent with other bands.

They’re rude, obnoxious, stubborn, disrespectful, argumentative with myself and each other, highly insensitive and sometimes they’re just plain a bunch of bitches. But I still care about them. And I can surely be a bitch myself at times, as well.

The days seem to keep getting hotter, longer and dustier, which I’m sure contributes to everyone being increasingly ready to be at each other’s throats. We all still have our respective jobs to do though, and there are excuses for those jobs not getting done.

No matter how hot it is or how far away the tent has been placed from the bus/RV/van, there’s no quitting and there are no sick days. Admittedly, there’ve been more than a few days I was ready to throw in the towel entirely.

These last East Coast shows have been very trying, but an ever rotating cast of characters on the scene here helps to keep things fun when they’d otherwise be unbearable. Whenever things get frustrating, there’s brief escape to be found with any number of bands to see and new people to meet on this tour.

If things get too heavy on the RV, a half hour spent watching Killswitch Engage does much to ease the rage, with the next half hour at Meg & Dia’s set bringing me back to a happy place. But don’t tell Killswitch that’s where I went after their set.

Even for as much as I can’t stand them sometimes and as dysfunctional as we are, all of us in the Bleed RV are still a family nevertheless. Maybe it’s the dysfunction that makes us one.

I absolutely hate them sometimes, but I still want to do right by them. I’ve invested myself in their success because I want to see them achieve it.

Not necessarily by common definitions of success that entail fame and fortune, but I want them each to see personal success and want them to feel like they’re here for a reason. I think I want them to get that because at the core of who I am, that’s all I really want for myself out here as well.