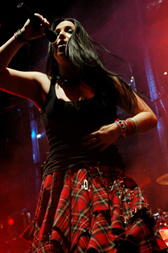 Back in the day, the Family Values Tour epitomized the big summer tour and brought together all the ginormous names of harder mainstream rock. While this year’s tour attempted to recapture that large-scale air, the balance between big name acts and generic up and comers left much to be desired.

The first hours of the show blurred together in a sweaty whirl of riffing, male egotism and faux edginess, with no legitimate standouts; definitely not a good start.

Flyleaf’s set would mark the shift towards bands with legitimate stage presence, however, and proved them to be the most likeable act of the day. While singer Lacey Mosley’s vocals weren’t perfect, she brought an emotional rawness to the stage and, along with her band mates, a youthful energy none of the other bands could capture.

Atreyu was … Atreyu, same as ever, while frontman Alex Varkatzas continued to look decreasingly integral to his band’s sound and performance.

Conversely, Evanescence frontwoman Amy Lee showed off her signature vocal range, which, impressive as it may have been, still couldn’t completely mask that the rest of her band members were distractingly unrecognizable hired guns.

Though they may have been the headliner, Korn did little to close out the show with the proverbial bang. Maybe they’re over trying to wow audiences, or maybe aging has left them physically incapable of it, but for a tour called Family Values, it sure doesn’t seem like the audience got its money’s worth.