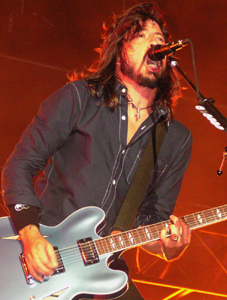 Maybe it was the fact that KROQ had ditched its traditional (909) Inland Invasion venue, the Hyundai Pavilion, or maybe it was because the lineup was the stereotype of a typical KROQ show, but this year’s Invasion took forever to spark, finally catching fire with the mighty Foo Fighters.

The night’s savior brought a tidal wave of energy and songs, even previewing tunes such as “Long Road to Ruin” from their forthcoming album, Echoes, Silence, Patience & Grace. With the Foos’ recent re-release of their classic album The Colour and the Shape, the boys started out old school with “Everlong,” “Monkey Wrench” and “My Hero,” continuing with rock gems like “Learn to Fly” and “Darling Nikki.”

The dynamic duo of singer-guitarist Dave Grohl and drummer Taylor “Animal” Hawkins kept the audience roar on high, especially during “Stacked Actors” where Grohl kept with tradition and ran through the crowd (after jumping on the shoulders of a hefty security guard), all while playing his guitar and wailing the song. From Grohl’s funny banter to the band’s determination to bring its best, the Foo Fighters prove why they are the quintessential rock band.

Newcomers Paramore were a breath of fresh air, while others such as Perry Ferrell’s Satellite Party and Chris Cornell performed sets that included favorite tunes from their other bands, namely Jane’s Addiction, Soundgarden and Audioslave.

Kid Rock was surprisingly entertaining in an Americana rock/porn flick kind of way (scantily-clad stripper-types in steel cages included), while supergroup Velvet Revolver seemed only a shadow of its former Contraband glory.

While fans waited with bated breath for headliners the Smashing Pumpkins, the band closed the show with a disappointing whimper. A poised and aloof Billy Corgan led the band in playing favorites such as “Bullet with Butterfly Wings” and “Tonight Tonight,” yet he still couldn’t put a spell on a crowd that was all too ready to go home.