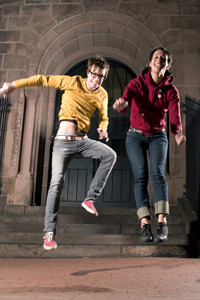 Move over White Stripes, there’s a new boy-girl duo taking the blogosphere by storm. Brooklyn-based, boyfriend-girlfriend twosome Matt and Kim have created a new super-pop genre that sounds happier than the ultimate amalgamation of all the brightest and exuberant Disney characters rolled into a giant cotton candy ball.

The band-crowd interaction is so alive during a Matt and Kim show that fans feel as though they’re part of the band, joining the duo for onstage dance shuffles and singing aloud to the anthem-like choruses of “Yea Yeah,” the band’s leading single, and “It’s a Fact.”

It’s hard not to fall in love with the cutesie-pie onstage affection that Matt and Kim share in public, as Matt dedicates “5K” to Kim’s caboose. Though the rougher “Grand” creates a dance frenzy on the floor, an intimate switch to the slower “Lightspeed” perfectly sets the tone for the end of the night.

Much like their music, a Matt and Kim show is uncontrollably fun and guaranteed to put a smile on any face.