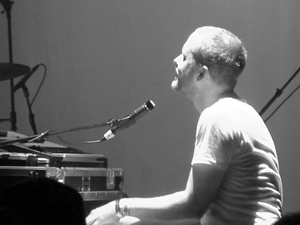 The best band you’ve probably never heard just played, and most likely you missed them. Midlake, a quintet from the small college town of Denton, Texas, earned their popularity overseas sounding like an impossible Traveling Wilburys-style collaboration between Radiohead, Elliot Smith and Travis. Though the five members have been together since 1999, this was the first time they headlined the Fonda, upping the ante from their last show in L.A. at the minuscule Troubadour.

Maria Taylor, second to hit the stage after adolescent openers Wild Youth, shocked the star-studded crowd when she welcomed Bright Eyes’ Connor Oberst and Har Mar Superstar on stage to join her performance.

Midlake mostly played tracks from their most recent album, The Trials of Van Occupanther, opening their set with the harmony filled piece “Young Bride,” an instant crowd pleaser. Frontman Tim Smith’s haunting Thom York-esque voice seemed to hypnotize the already tranquil crowd as they softly sang with him.

“Rosco,” the first single off of Van Occupanther seemed to get the biggest rise out of the audience, while “Balloon Maker” off of their 2005 EP of the same name pleased the loyal longtime fans.

Perhaps the biggest treat of Midlake’s set was a mellow, almost beatless rendition of “The Pills Won’t Help You Now,” a collaboration done with the Chemical Brothers on their 2007 album, We Are the Night. Pick up an album, memorize the words and quietly prepare yourself for Midlake’s next haunt.