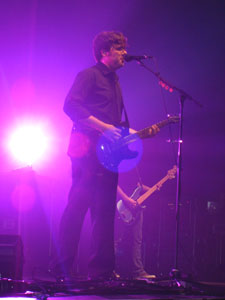 It’s been almost three years since Jimmy Eat World’s last album, Futures, hit stores and a few since they’ve been on tour. Fans have been wondering for some time whether the band’s last album was somewhat of a misnomer for them. At the Wiltern all critics were silenced when Jimmy Eat world hit the stage to promote the same-day release of their newest album, Chase This Light.

The openers, Maritime, an indie pop foursome from Milwaukee, opened with a decent half hour set that did an impressive job of warming up the audience. After a half hour intermission, the curtain was raised to announce that one of the first ever emo groups, Jimmy Eat World, was finally about to perform.

They began with “Big Casino,” the first track off Chase and didn’t miss a beat the entire night. The only exception was when Jim Adkins’ guitar lost power for three brief moments in the show.

“Power was out ... rocked my ass off though!” he said after the first time.

But in no way did this have a negative effect on the crowd. During songs like “For Me This Is Heaven” and “Pain,” you could barely find a person who wasn’t mouthing the words or waving their arms in celebration.

No hit was left unplayed. Each of the band’s four releases got the same amount of play, and from gritty songs like “Get It Faster” to emotional ballads like “23,” the band showed all its diversity.

The encore began with an acoustic version of “Your House,” and it only got better. They played a total of five songs, the final ones were my personal favorites, “Sweetness” and their biggest single to date, “The Middle.”

As the band took their bows and Adkins waved goodbye to the audience, I recalled the first thing he said when they appeared on stage: “Today we have a new album. We’re very excited. It’s been a long time coming.”

And I think to myself, yes, it has … but it was worth the wait.