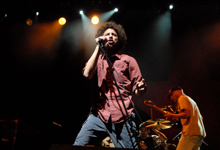 Everything that happens in Vegas is supposed to stay there, right? Well that definitely isn’t the case for this year’s third annual Vegoose Music Festival. People are talking, and with massive headliners like Daft Punk and Rage Against the Machine, who wouldn’t?

Thousands flocked to the Sam Boyd Stadium, a large majority in costume, making the festival one part Halloween party, one part concert; stimulating both the auditory and visual senses.

Public Enemy, M.I.A, Iggy & the Stooges and the Shins were just a few of the bands that played the first night, but the theme of the evening pointed to one Parisian duo. The buzz was about Daft Punk and their life-changing spectacle that was to end the night. When the two “robots” appeared atop their large glowing pyramid, hands arose as if a religious figure was present. Their stunning arrangement of lights illuminated the sky like a nearby casino as they seamlessly mashed up tracks from their catalogue of albums.

Headlining day two was Rage Against the Machine, but with the stellar lineup on Sunday they couldn’t completely steal the spotlight. Muse had the crowd in awe as they pounded out their rich symphonic tunes, playing a bit harder set than usual.

UNKLE followed playing tracks off of all three of their albums for the first time as a complete band. Saturday performer Lupe Fiasco even joined them on stage to close out their extended set.

Rage ended the fest with fury and enough energy to power a small town. Their two-hour set hit every major tune and struck every chord. The sweaty crowd bounced like an angry sea, screaming the hooks to every song like an army of soldiers back to their leader.