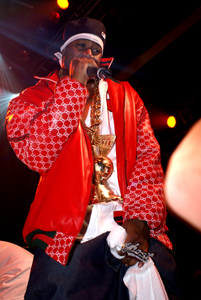 Ghostface and Rakim on the bill together!? Two of the most elusive MCs in the game are appearing side by side on the Hip Hop Live! tour.

I know people (not including myself) who have waited hours just to see each of these legends perform. And tonight – surprise – both New Yorkers were right on time. Ghost started at 10:30 p.m., while Rakim hit the stage at 11:30 p.m. Unheard of!

Ghostface, who often rivals Flavor Flav in the size of medallions hanging from his neck, romped around the stage delivering his obscure yet classic lyrical jewels. And once again, like he did months ago at the KeyClub, he stopped to snap on “snap” music.

Rakim looked at ease and very pleased to be present. “You still nasty as a motherfucker,” he answered when he posed himself the question, “Why do you still do it?”

Once again, East Coast MCs prove it ain’t where you from, it’s where ya at.