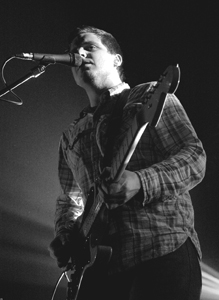 Turn on your TV today and it can be easy to jump to the conclusion that popularity and integrity are two animals that can’t be caged together. One has to be sacrificed to maintain the other, whichever way you swing, right? While that may apply to the majority of cliché-spewing rock bands out there, both Thrice and Brand New know better than most that the mass media isn’t always the best authority on these things.

Though it could be argued Thrice at least deserved billing as a co-headlining act instead of an opening one, the Orange County natives still squeezed just as much action into their condensed set. While frontman Dustin Kensrue and guitarist Teppei Teranishi are masterfully skilled at their respective instruments from a technical standpoint, it’s their ability to convey every raw, heartbreaking and ultimately inspiring emotion behind the notes that makes Thrice unique.

Starkly contrasting Kensrue, Brand New frontman Jesse Lacey took his “I only play for myself” attitude to an extreme, keeping audience interaction to a minimum and creating more of a chaotic, unpolished jam session vibe on stage. It was a fine line of not caring that Lacey walked, one that under any other musician would just come off half-assed, but something he can pull off because of how much he emotionally invests himself in his songs. While Kensrue bonds himself to his audience by calling them to arms, so to speak, Lacey becomes relatable by introverting and making himself vulnerable, a vastly different means to achieve the same end.

Both bands have had their run-ins with mainstream attention, but they’ve consistently marked their careers with writing music they stand by as people, regardless of whether they held the spotlight’s favor or not. These two bands may be the best thing happening in rock music right now.