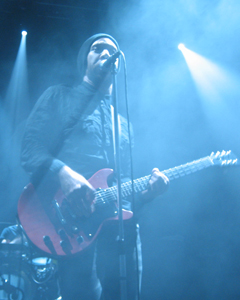 Pugnacious, those She Wants Revenge fans. After being elbowed in the eye, fiercely manhandled and called “Boots,” (“Get in back of the line Boots, yeah I’m talkin’ to you!”), I feared this review would never come to fruition.

Thankfully, the angels were watching over as Justin Warfield and Adam 12 put on an amazing and euphonic set. Both gentlemen, who come from a hip-hop background, knew how to get the crowd pulsating.

Warfield was on fire, dancing nonstop and breaking only to replenish with liquid. Adam 12, who looked debonair in a black suit with a cigarette hanging from his lips, was intensely into the music and closed his eyes while playing the keyboard.

The heavy fog machine made the band barely visible to the eye, yet it added a strangely romantic air. The electronic beats never sounded so vivid as illustrated in new songs like “True Romance” and “It’s Just Begun” from their latest, This Is Forever, which, surprisingly, the black-clad audience knew all the words to already.

Being their hometown show, their brooding guise took a step back as Adam 12 told the crowd to “give it up for his godson” who was in attendance, and beckoned us to say hello to their parents up in the balcony who were then seen dancing to the finale “Out of Control.” It warmed my bruised little body.