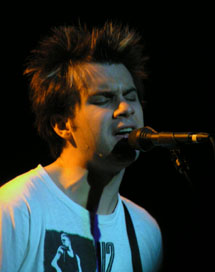 Though he calls it his "acoustic guitar" tour, Howie Day’s live show is definitely not that of your typical coffee shop solo act. The modestly dressed singer-songwriter impressed even cynics on a recent Monday night.

With songs like "Ghost" off his 2000 release Australia, Day captivated the sold out crowd by recording live bits and pieces of music as he played them. Layering lead guitar riffs over rhythm guitar chord progressions, vocal harmonies and adding percussion (by banging on the body of his guitar), each song had a fuller sound than many multi-person bands ever accomplish.

Though undeniably trite, cliché and whiney, Day’s music is still irresistibly catchy and charming. His set consisted of old favorites and hits off of his most recent album, Stop All the World Now. A highlight of the show included Day’s impersonation of David Gray covering a Macy Gray song – simply due to the fun fact that the musician’s names are similar.

Day’s nearly 90-minute set dwarfed that of his opener, Susie Suh, with her barely there, two-song set. Suh’s music was of a similar singer-songwriter style, but with a soft, rich, female flair. Definitely an appropriate complement to Day, Suh has strong vocal ability and a promising future.