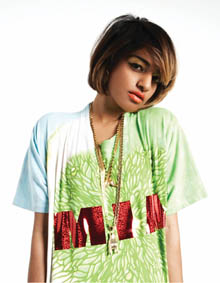 Unlike many of her male counterparts, M.I.A. doesn’t rap about fly rims, opulent jewelry, multi-zeroed bank accounts or guns – well, at least not in the same gangsta-machismo manner. Nope, instead this English-born Sri Lankan raps political couplets and multiple bars on social issues that bang harder than all the 50 Cents and Kanye Wests combined.

Call it smart rap, if you will, but M.I.A.’s approach to the hip-hop game has landed her atop the throne of indie rap, and her live show secures her rule over the indie hip-hop community.

Blasting head-banging hits from her latest, Kala, and her debut, Arular, M.I.A.’s electric presence sends a tingle down the audience’s spine as soon as she hits the stage and charges through opener “Bamboo Banga” and “Paper Planes,” the two most noteworthy tracks from her recent release.

Relying heavily on fans’ responses, M.I.A. intimately integrates herself into the audience, not literally, and breaks down the artist-fan division to become one with the listeners.