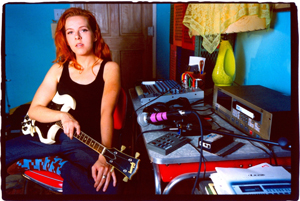 Built to great fanfare, Frank Gehry’s Disney Hall became a showpiece for Los Angeles both architecturally and acoustically. Not being a connoisseur of classical music, I went once, loved it and crossed it off my list of things to do.

Little did I know that the venue had plans extending far beyond traditional fare, like showing The Cabinet of Dr. Caligari on Halloween, accompanied by a fantastical organ, and its Songbook Series, which features “intimate evenings of song” with singer-songwriters like Joanna Newsom, Bernadette Peters and most recently, Neko Case.

Case both thrilled and chilled the packed house with haunting and beautiful songs. Taken from albums like The Tigers Have Spoken and her most recent undertaking Fox Confessor Brings the Flood, songs like “Pauline” and “Maybe Sparrow” showcased Case’s sultry and kick-ass voice.

Already a Case fan, hearing her in concert made me like her that much more, making the songs even richer and more interesting. As one rabid fan shouted out, “Neko, you’re the real deal.”