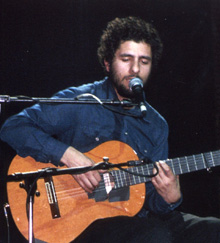 José González has a voice etched somewhere between an Elliott Smith or Nick Drake hush and a Bill Withers or Cat Stevens soulful stir. Ironically looking a little like Cat Stevens, González took the stage and played songs from both his new album, In Our Nature, and his first, Veneer.,p> With so many artists falling prey to overproduction, it’s good to know that with only a voice and a guitar, an artist can make you feel what he feels. González wears his heart on his sleeve.

Just when I thought the show couldn’t get any better he proceeded to play two of my personal favorites songs: a cover of Massive Attack’s “Teardrop” and his own “Crosses,” with its chorus “Catch some light, and you’ll be alright.”

I did catch some light, provided by the voice and guitar of José González, and it was better than alright.