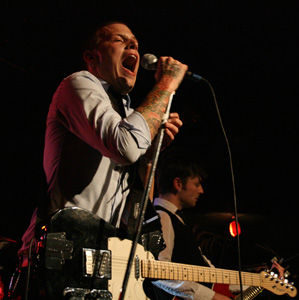 It’s good to know that the two-tone scene with black and white checkered designed T-shirts, hats and shoes that at one time visually defined the English ska and punk movement is not dead. English rock and punk band Beat Union had the two-toned crowd jumping up and down as they opened for Westbound Train and Bedouin Soundclash.

Beat Union’s sound is comfortably familiar to the vintage tunes of the Clash and the English Beat, and the contemporary band the Dead 60s, a two-toned talent that recently called it quits.

Beat Union’s debut album, Disconnected (set for release April 22), comes off as sonically polished and seamless, but lacks the grit and soulfully raw passion the band exudes in their live show performance. If you’re able to check them out live don’t forget to wear your checkered sneakers