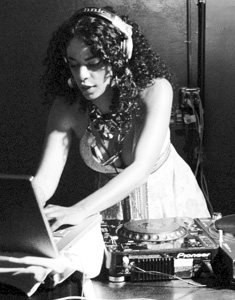 While waiting for the show to start in the main room, DJ Rashida played old school grooves, classic funk and R&B in the warm-up room. And after opening the main room, Garth Trinidad, one of the event’s producers, held down the turntables for a set.

When the Brand New Heavies stormed the stage, the energy in the room was absolutely dazzling. They sounded super tight, and funk spilled off the performers in thick waves. Vocalist N’Dea Davenport, back with the Heavies since 2006, brought massive soulfulness to the band.

Then came the man of the hour, Vikter Duplaix. He’s the co-producer of Kiss-N-Grind, a weekly L.A. party, along with Trinidad.

He was up for a Grammy for his song “Make a Baby,” and this party was advertised as the live version of K-N-G in support of him. He had the crowd eating out of his hands.

The showstopper of the night was Caron Wheeler from Soul II Soul. “Back To Life” is one of those classic tracks that will always get the heart thumping and booty shaking.

When the beat kicked in after the stirring vocals of Ms. Wheeler, the whole floor moved. You couldn’t help but boogie down with everyone else.