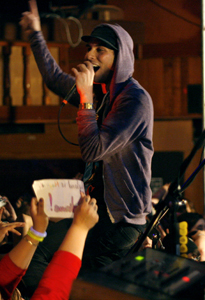 Playing to a full house littered with celebrities from the pop punk world and scenesters galore, Cobra Starship delivered with all their zest and vigor a dance party that had the audience moving from the first keytar note to a lingering guitar buzz at the end of their three song encore.

The star power present (other than that of the band) was overwhelming: members of Cute is What We Aim For, “Hannah Montana” star Miley Cyrus and Adrian Grenier, as well as Internet celebrity Jeffree Star, who appeared during Metro Station’s set. Cobra Starship came into their set ready to rock, delving into hits off their new album, Viva La Cobra, and getting the audience riled up and dancing in no time.

Frontman Gabe Saporta kept the energy up throughout the set with erratic dancing, acrobatics and open conversation with the crowd between songs, with assistance from the band and a stunning, seizure-inducing light show. When Cobra Starship sets out to have a dance party, they do it right and they do it with a bang.