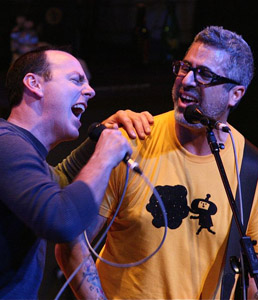 The most important punk rock band of your lifetime … seven nights of Bad Religion on Sunset Boulevard at the House of Blues. It’s like a national holiday when these guys come back to Los Angeles to take back their city for a week.

The lights go down. The curtain rises. The pit comes to life as a barrage of guitars blast out song after furious song.

Messages of hope for a better world, the strains of politics on life and the occasional anti-organized religion song resonate in the hearts and minds of everyone in the club. These fans aren’t just here for the music, but for the message, too, and that’s what separates this band from the rest.

Bad Religion are a band with a message, and it’s brought to you by some of the smartest men on the planet; front man Greg Graffin is a professor at UCLA.

The group played all the singles and then ended the night with an acoustic set that had never been done before. These guys are proof that if you do your thing and do it well, you will not only last forever, but you can change the world along the way.