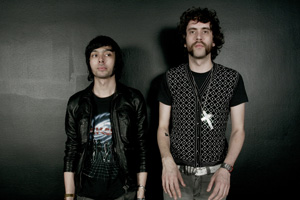 The most anticipated summer tour is no doubt the Vans Warped Tour, and this year the festival will make three area appearances. The inaugural show is in Pomona June 20 with the second show hitting Ventura June 22. Then it’s off to see the country before returning to Los Angeles for the final show on Aug. 17.

Bands jump on and off the tour as things progress, so the line-ups are not necessarily the same for any two given shows. Some of the bands you can see in Pomona that will not appear in Los Angeles are Maylene and the Sons of Disaster, August Burns Red, As I Lay Dying, the Higher and the All-American Rejects. On the other hand, bands that will play the L.A. date but not Pomona or Ventura include Sky Eats Airplane, Rise Against, Anberlin, All Time Low, GBH and Ludo. www.warpedtour.com.

Xavier de Rosnay and Gaspard Auge, better known as Justice, will headline this spring’s MySpace Tour. The French outfit is riding high after their latest release † received a Grammy nomination for Best Electronic/Dance Album, along with another nod for Best Dance Recording for their single “D.A.N.C.E.” The guys also won Plug Independent Music Awards for New Artist of the Year and Electronic/Dance Album of the Year.

The MySpace Tours, every spring and autumn, are known for “mixing up” their lineups from tour to tour – there’s no set genre that acts have to fit in order to get onto a bill. The MySpace Tour stops at the Mayan Theatre March 31.

The Progressive Nation Tour will be criss-crossing the country through June, but the party gets started right here in Los Angeles May 2. Prog-metal band Dream Theater and Swedish death-metal group Opeth will be sharing the stage with Between the Buried and Me and the highly acclaimed band 3.

3 has just released a special version of The End is Begun that includes a DVD featuring live footage of their performance at the Metal Blade 25th Anniversary show, shot in Massachusetts. The L.A. concert will be held at the Gibson Amphitheatre. www.theband3.com

OK, this one’s not a tour. The All Points West Music & Arts Festival is brought to you by the people who promote the Coachella Festival, and it will probably become a big annual phenomenon just like the Indio event.