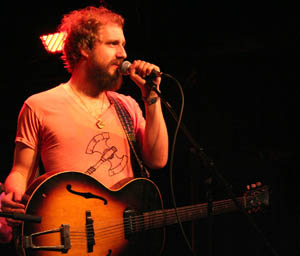 In the relatively few years that I have been an ardent music collector/seeker/appreciator, an amazing live show is often a rare occasion. Getting to see the Pixies in a smallish venue like the Glass House is one of my favorite live experiences. This was only heightened by the fact that Kim Deal spent a good deal of her time strumming out beats with a cigarette dangling from her mouth.

Although Matthew Houck doesn’t quite have the legendary status of Deal just yet, this show at the Echo was one of the best live shows I’ve seen in some time.

On Phosphorescent’s most recently released album, Pride, most songs are melancholy and bittersweet. The album is almost fully a solo effort, aside from a few backing vocals.

So when Houck and company took the stage I was prepared to be disappointed. Instead, what the four guys on stage turned out was a remarkably smooth, harmonic, electrified version of Houck’s charming songs.

What Phosphorescent performed on that day was an event not to be missed.