Presidents of the United States of America: March 21 @ the Roxy Theatre 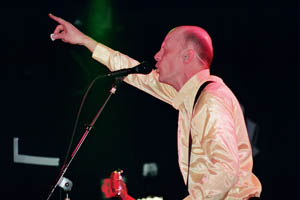 After opening sets by multimedia comedy act Pleaseeasaur and cheeseball rock quintet Ludo, it should have been that this sold-out show would qualify as the year’s ultimate novelty lineup. And it was, save for headliner the Presidents of the United States of America, whose past reputation for humor had no effect on the seriousness with which they’d play live.

The Presidents are a straightforward rock act, and pushed by Chris Ballew’s insistence that they’re moving forward, alternated between songs old and new, only to remind us why they’d been so exciting and fresh in the ’90s.

Guitbassist Dave Dederer has been more or less replaced by Andrew McKeag at this point, and the Presidents are now in their 40s, with Ballew’s appearance fairly unchanged and, thus, still rather dad-like. Drummer Jason Finn no longer has the confused gaze he had in early Presidents videos.

The trio is tight and obviously well-established, even with the addition of McKeag; the only unfortunate thing about them is how their songs have evolved, as they once played perfectly asexual, perfectly apolitical minimalist rock to fit nicely into the post-grunge ’90s Northwest scene, and now write songs headed into Fountains of Wayne territory, which, frankly, won’t put anyone in the ranks of greatness.

But those early songs are wildly loved to this day, and though it’s been over a decade since their last solid string of hits, one would assume that they were the most relevant band in the world based on the way the audience raised fingers in the air and yelled “meow” and “outside!” in unison to opener “Kitty.”