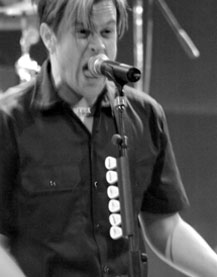 Texas-based rockers Bowling For Soup may not be the first of their kind, but that certainly hasn’t stopped them. With a Grammy nomination under their belt, this pop-punk foursome has stepped out of the shadows of other bands in their genre and has built a solid reputation for being a bunch of wise guys. The band ultimately lived up to their reputation during their 90-minute set, proving they are the jokesters they’re said to be.

While delivering catchy, upbeat tunes and a handful of crowd favorites, the members of Bowling For Soup paused to drink beer, cracked jokes about one another, and offered lovesick fans tours of their bus – for a nominal fee of $45.

Despite frontman Jaret Reddick complaining of having a cold and being a bit loopy from Robitussin, no one would have suspected a thing. The band’s entire set couldn’t have sounded more polished. Even Reddick must have thought so, because after performing "Last Rock Show" from 2002’s Drunk Enough to Dance, he congratulated himself on a job well done.

The band continuously paused between songs, mostly to crack jokes and show off their hidden talents – one being their ability to catch guitar picks in their mouths and spit them back onto the crowd.

During a few moments throughout Bowling for Soup’s set, it seemed obvious that the audience was yearning for a little less talk and a little more rock. But despite the band’s tendency to babble, they seemed to find a perfect balance between knowing when to stop and when to say just the right thing.

"I was convinced that L.A. hated us," Reddick told the audience half jokingly, "but you guys rock." From then on, the audience was more determined than ever to prove that L.A has much love for the band, amping up the intensity of their howling cheers and hollers.

As Reddick segued into "Punk Rock 101," he flashed the universal sign of rock and told everyone to put their put their hands in the air and do the same. The music was accompanied by two giant blow-up versions of rock hands.

The crowd saved its biggest cheers for "1985," the breakthrough hit from their 2004 release A Hangover You Don’t Deserve, "Girl All the Bad Boys Want" and their newest single, "Alone." A cover of Britney Spears’ "… Baby One More Time" was also celebrated by a massive sing-along.

With a mix of punk, emo, metal and pop sounds, the Riddlin’ Kids, also from Texas, opened the show with an energy packed set which included songs mostly off their new album, Stop the World. But unlike Bowling For Soup, the Riddlin’ Kids ripped through songs such as "Talk of the Town" and "Just Another Day," barely stopping to catch their breath.

When singer Clint Baker did pause, however, it was to thank Bowling For Soup for inviting them on their nationwide tour. The Riddlin’ Kids proved themselves worthy of the stage, with a set that was definitely rocking but unfortunately missed by many still waiting to get inside the venue.

American Hi-Fi was the final opener of the night. Although they are probably best known for their 2001 radio hit "Flavor of the Weak" they remain surprisingly underrated. On this particular night, however, the audience seemed to really dig the band as they showcased tunes off their upcoming album Hearts on Parade, due out in March.