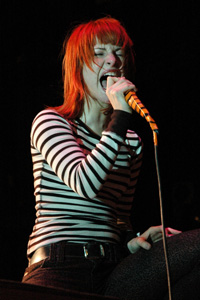 Taking a cue from the Warped Tour social circles that have comprised the entire band pool from which to draw road mates for the non-Warped tour circuit that fills the other nine months of a year, Bamboozle Left decided to continue the trend of picking headlining acts from that increasingly exclusive cadre for this year’s lineup. The funny thing is, the rest of the 100-plus bands that played between both days were, with few exceptions, also decidedly set on modeling their sound, look and stage presence on those same scene archetypes, with coattail riding in general seeming to be the overarching theme to unify both days.

Even the kids in attendance seemed more homogenized than ever before, again with only a few basic models used as the template, but oh so much awful, badly dyed hair inspired by them. What was most appalling was the unspoken attitude among fans that their presence at this show really wasn’t about the music at all, and more just to be seen in and of itself. Between the preadolescents who deify MySpace celebrities above all else and the bands who have decided originality and integrity are archaic and outdated concepts, it made for a disillusioning weekend to say the least.

Luckily, day one saw Alkaline Trio continuing to be anthemic and infectious as ever, perfect examples of how a band can go mainstream without losing their signature grit or edge.

Contrasting that, Paramore – who have blown up beyond what anyone imagined, but nevertheless remain true to who they are – would follow. Dispelling any rumors of breakups or inner turmoil, the Tennessee natives sounded tighter than ever, and both frontwoman Hayley Williams and guitarist Josh Farro showed a marked stepping up of their showmanship and technical musicianship through their set.

Day two saw even fewer worthwhile bands perform and was only more difficult to sit through in anticipation of that night’s headlining acts, as hearing Metro Station start the day off would be enough to make even the most tone-deaf of scene kids turn around and drive home.

Chiodos couldn’t play any quicker, but once they did, it was enough to make the previous eight hours of monotony worth it. Truly redefining the word epic as it relates to modern rock, these guys were always destined for huge stages, with even Bamboozle’s main stage struggling to contain them. Thrashing and shredding relentlessly from start to finish of their set, the members of Chiodos effectively stole the day, if not the entire weekend, and showed at least 50 other bands exactly how rock is done.

My Chemical Romance took the stage to close out the weekend but for all the hype of seeing the fabled great Black Parade ringleaders, failed to live up to expectation. Nice as it is to hear certain songs played live after being embedded in our subconscious by every media outlet imaginable for the last two years, the band seems to have lost its magic and intensity, making the days of an MCR that was hungry to make it four years ago seem that much more distant.

Meanwhile, on the far opposite end of the venue, Dillinger Escape Plan was quite literally tearing apart their stage and made sure at least a very small portion of concertgoers got their money’s worth from the last band they’d see that night.