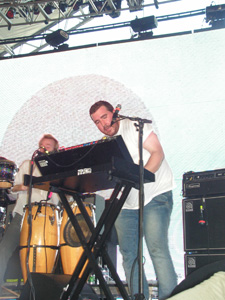 I’m not sure Coachella will be able to top itself. 2008’s line-up seemed a little light on the heels until one of the most influential musicians of all time was added. Before your eyes start glazing over, this recap is not an ode to Prince, as there were some really spectacular sets throughout the weekend – hello, Roger Waters!

Saturday kicked off with bands you should check out or you’ll be bummed when they’re famous. I have a feeling MGMT’s underground fan base is going to steadily change this summer. The hot desert was the perfect backdrop for their trip/electric rock sound. Montreal’s Islands sounded like they’re on the right track to becoming one of 2008’s indie darlings.

The Sahara Tent was filled with all the dance/electro you could handle all weekend. On Saturday, the Brits brought the tent down – M.I.A, almost literally. Mid-set the Sri-Lankan beauty invited the “leaders” to come onstage, but that turned into the entire tent rushing the stage, climbing the rafters and creating perhaps the most chaotic scene in Coachella history. The energy was raw and amazing, albeit scary.

Not nearly as harrowing, but just as energetic, Hot Chip fans overflowed the tents, but no one seemed to care about getting close to the stage. It was all about dancing.

I finally got the chance to see why Flogging Molly is such a fan favorite. Their set felt like they were playing an intimate show in a living room with close family and friends. No one within earshot could escape the infectious music – you just had to do a little jig.

Sunday’s weather was much cooler, which made it easier to hang out between sets of the Cool Kids, Autolux and My Morning Jacket. Roger Waters closed out the festivities. I don’t even need to get into that, but I will ask: Has anyone found the pig yet? [Editor’s Note: The pig has indeed been found. Two La Quinta couples will share the $10,000 reward and will each receive four festival tickets for life.]